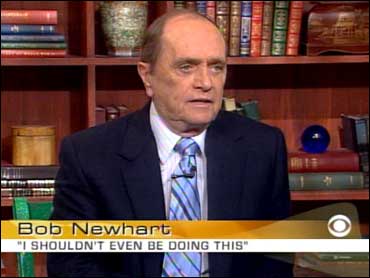 Bob Newhart's first comedy album, 1960's "Button Down Mind," landed at No. 1 on the charts and launched a decade of stand-up success.

Newhart is often described as an ordinary man who happens to be one of the funniest guys in the room. Now he's finally decided to tell his story in a book called "I Shouldn't Even Be Doing This."

Early on, Newhart's dry wit from the Midwest was selling out record stores and theaters alike. A string of television sitcom hits soon followed. He's also had memorable roles in movies such as Will Ferrell's "Elf."

His latest venture is being as well received as his previous ones, and the book just received a good review from USA Today. The book tackles everything from the differences between White Sox fans and Cub fans like Newhart (he says being a Cubs fan prepares you for life) and the origins of his observational humor.

Newhart told The Early Show co-anchor Harry Smith that other people like Shelley Berman and Johnny Winters and Lenny Bruce were also pioneers.

"It was a different kind of humor … that we found funny," he said.

In 1961, Newhart did a television show for NBC, and said he "got a Peabody and an Emmy and a pink slip from NBC all in the same year. I really wasn't ready."

His television career took off with "The Bob Newhart show" in 1972, the comic's name would appear in the title of four shows over the next three decades. Still, Newhart said he never won an Emmy for the show.

"Actually I didn't put myself up until the last three or four years," he said. "Then you tell yourself, 'If I had put my name up, I would have been a shoe-in for this.' "

For an excerpt of this book go here.