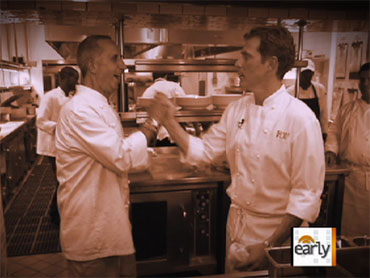 This summer, "The Early Show" anchors got a chance to work at their dream jobs. Co-anchor Harry Smith, for instance, became a cowboy. But the fun wasn't just for us! We wanted to find out what your dreams are. After an overwhelming response, we decided to give some of our lucky viewers a chance to live out their job-related dreams, too.

On Monday, co-anchor Harry Smith told how he surprised one Bobby Flay fan with the job of his dreams. Flay is, of course, the show's resident chef.

Mimi Blackwelder wrote in, asking us to surprise her husband, Michael Blackwelder, while the couple vacationed at the famed Atlantis Resort on Paradise Island in the Bahamas.

Michael, however, was unaware that Mimi had responded to our offer of making a viewer's dream job a reality. So "The Early Show" showed up unannounced to cut his vacation short.

Michael, a service manager at a Delaware car dealership, has always been a passionate home cook -- and a huge fan of Flay's TV shows. So it's always been his dream to cook alongside the great chef.

And since Flay is a member of "The Early Show" family, Smith enlisted his help to make Michael's dream come true.

When told he would cook with Flay, Michael said, "What? Ooooh. No way! All right, now I am shaking!"

Mesa Grill Bahamas is one of Flay's six critically-acclaimed restaurants.

The reason it's so successful? "Bobby runs the kitchen to perfection," Smith said, "and they produce the best elegant, yet bold Southwestern cuisine."

Smith remarked to Michael before they entered Flay's kitchen, "Don't be nervous."

Michael replied, "Oh no, I'm just walking into a restaurant with Harry Smith to meet Bobby Flay. Why be nervous?"

Smith explained Michael was given the chance to cook with Flay not only for fun, but for a room full of paying customers.

Flay said, while helping Michael with his chef's coat, "Anybody who wants to work for free in my kitchen is allowed to work!"

Michael got a few key pointers from Flay, including to pepper and salt both sides of a slice of meat.

Flay said, "Both sides always -- that's the most common thing I say when I walk around the kitchen, 'Did you season with both sides?" '

While some aspects of the job were difficult, such as tasting sauces, Michael excelled at others, such as not flipping meat over too many times.

When Michael didn't turn a filet over, Flay said, "Let me tell you something: You are 90 percent ahead of every guy in America."

Soon, Michael had all three fish dishes on the menu mastered -- almost.

Michael said, "My presentation is a little off tonight. I'm sorry!"

But Flay put him at the seafood station anyway. Soon, orders started rushing in.

Flay and his culinary director, Rene Forsberg, kept a close eye on Michael, and in the end, it was an impressive sight to see, Smith said. Michael seasoned, sauced and plated like a pro. He was living his dream, cooking in the kitchen of his hero.

But what mattered most to Michael was the opinion of the toughest critic in the room -- his wife, Mimi.

Smith told Michael and Mimi, "So now, you are a line cook with Bobby Flay at Mesa Grill in the Bahamas at Atlantis, and now it's time to taste."

Smith said, "Here is the real question, is it better than anything (he's) ever cooked at home?"

And the praise didn't stop there. Flay said he was on fire all night.

Flay said, "I think that he moved around the kitchen really well, he got the hang of it, he got the understanding of how to use the ladle, how to use a squeeze bottle, how to cook the fish."

The praise made Michael's dream that much sweeter.

Michael told Flay, "I just want to thank you so much. It's been a dream come true, literally."

Flay responded, "Thank you very much. You are welcome in my kitchen, anytime, any of my kitchens!"