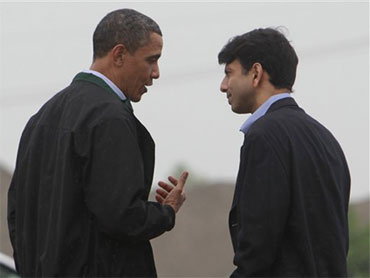 In his new book "Leadership and Crisis," Louisiana's Republican Gov. Bobby Jindal, often considered a potential future presidential contender, takes President Obama to task in his new book for the White House's response to the Gulf Coast oil spill, according to reports.

Jindal suggests the president and his administration were more interested in the political optics of their response than the actual impact of their actions, according to Politico.

The governor's book reportedly recounts a conversation between Mr. Obama and Jindal on the president's first trip to Louisiana after the BP oil spill. The two were at odds over a letter Jindal sent to Mr. Obama, requesting authorization for food stamps for those who lost their jobs because of the spill.

"Careful," Jindal quotes the president as warning him, "this is going to get bad for everyone."

Jindal also reportedly accuses the White House of tipping off reporters so that they could catch a confrontation between then-White House Chief of Staff Rahm Emanuel and Jindal's chief of staff, in which Emanuel chewed out the governor's staff about the food stamp request.

Politico points out that Jindal's food stamp request likely angered the White House because the governor told the media about the request a day earlier and demanded a quick response.

Jindal also wrote that Mr. Obama's insistence on instituting a moratorium on offshore drilling, in spite of the risk it posed to jobs, showed that "The human element seemed invisible to the White House."

The White House responded to Jindal's attacks by saying the administration was working closely with state and local governments from "day one."

"The administration's response was the largest response to an environmental disaster in our nation's history and included not just nutrition assistance but also over 40,000 workers, ongoing efforts in science and seafood safety, the Mabus report for long-term Gulf recovery and the creation of the BP $20 billion fund for Gulf families and businesses," White House spokesman Adam Abrams said in a statement.

Jindal is not the only prospective Republican presidential candidate who has recently penned a book. Former House Speaker Newt Gingrich and Texas Gov. Rick Perry recently wrote books, and former Alaska Gov. Sarah Palin is kicking off a book tour for her second book -- "American by Heart: Reflections on Family, Faith, and Flag."

Former President George W. Bush also recently released his memoir "Decision Points." In it, Mr. Bush refrains from criticizing Mr. Obama, but he acknowledges the mistakes of his own administration during an earlier Gulf Coast crisis -- Hurricane Katrina.