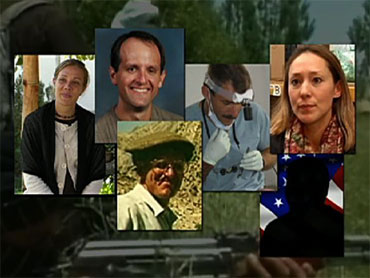 This story was filed by CBS News correspondent Mandy Clark in Kabul.

The American Embassy in Kabul said Wednesday that the remains of four Americans killed during a medical mission in Northeastern Afghanistan were being flown back to the United States.

The four victims of an apparent robbery and execution-style shooting "have begun the return home to their families, aboard U.S. military aircraft and accompanied by FBI personnel," Embassy spokeswoman Caitlin Hayden said in a statement.

Two more Americans killed in the incident were to be buried in Afghanistan, according to Hayden, "in the country they selflessly and courageously served for so many years."

The team leader, American doctor Tom Little, is one of them. Little spent the past 30 years in Afghanistan working as an eye doctor for the country's poor. His wife Libby said he passionate about helping the Afghan people and Tom would have wanted Afghanistan to be his final resting place.

The FBI will conduct it own investigation into the murders, and plans to perform autopsies on the bodies back in the United States.

In all, 10 members of the International Assistance Mission medical team - six Americans, two Afghans, one German and a Briton - were ambushed and killed by gunmen last week in Badakhshan province.

More on the Afghanistan murders: