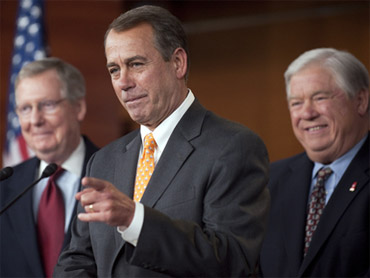 House Speaker-in-waiting John Boehner pledged Wednesday that Republicans will use their new majority to seek a "smaller, less costly, and more accountable government," and said he hoped President Barack Obama would join them.

"We hope he is willing to work with us on these priorities. But as I have said, our new majority will be the voice of the American people as they expressed it so clearly yesterday," Boehner said.

The 60-year-old Ohio Republican spoke on the morning after his party swept to power in the House, taking 60 seats away from the Democrats and leading for five more. Republicans also cut deeply into the Democrats' Senate majority, presenting Obama with a new political reality after two years of working with big Democratic majorities in both houses of Congress.

Boehner was joined at a news conference by Senate Republican Leader Mitch McConnell of Kentucky and Mississippi Gov. Haley Barbour, who headed the GOP campaign organization that helped gain 10 governorships.

McConnell was more pointed than Boehner, saying that what Democrats who were defeated at the polls "learned is that choosing the president over your constituents clearly doesn't work."

Republicans will "work with the administration when they agree with the people and confront them when they don't," McConnell said.

He said he hoped Obama would work with Republicans "on things like spending and debt and trade agreements and clean coal technology and nuclear power. ... The question is how do we meet in the middle."

A leader of a stronger minority in the Senate - but a minority nonetheless - McConnell said, "While clearly the election did not transfer full control of the government to the opposition, it is the first step in changing the direction of what we have been doing in Washington."

McConnell added that Mr. Obama's health care law was a "metaphor for the government excess we've witnessed over past two years."

With their lopsided win, Republicans are ushering in a new era of divided government and dethroning Speaker Nancy Pelosi, a prime target of their campaign.

Repealing the health care law, with its mandates and subsidies to extend health insurance to nearly all Americans, has been a Republican rallying cry for months but Obama, with his veto power, and the Democrats still in control of the Senate stand in the way. Several Republicans indicated their challenge to the law won't happen overnight when they take power.

"I think it is important for us to lay the groundwork before we begin to repeal this monstrosity," Boehner said. Senate Majority Leader Harry Reid, who survived a tea party challenge in Nevada, said "I'm ready for some tweaking" on the health care law but would fight its repeal.

The takeover of the House followed a four-year turn in the minority for Republicans, who have stressed publicly that they view their triumph as a second chance given by voters who stripped them of power in 2006.

In a news conference lasting only about 15 minutes, Boehner said at least a half-dozen times that Republicans would "listen to the voice of the American people" as they draft legislation to steady the economy, cut spending and reduce the scope of the federal government.

Boehner said Pelosi had tried to reach him by phone. "She left me a very nice voicemail," he said, adding he felt confident there would be a smooth transition as Republicans take over the reins of power in the House.

He also said he didn't see any difficulty incorporating new GOP House members supported by the tea party into the chamber's Republican team. Many of them campaigned on the basis of deep spending cuts or other proposals that could prove intensely controversial, including steps to privatize Social Security or eliminate entire agencies of government.

In a classic Washington minuet, the Republicans held their news conference less than two hours before Obama fielded questions from reporters at the White House, his first public appearance since the voters delivered their verdict on his first two years in office.

Obama said that voters frustrated by the pace of economic recovery dictated the Republican takeover of the House, adding, "As president I take responsibility" for a failure to restore job growth more quickly.

The new Congress convenes in January, and Boehner said Republicans would use the interim to decide precisely how to proceed with an agenda aimed at helping an economy still struggling to emerge fully from the worst recession since the 1930s.

Lawmakers return to the Capitol in two weeks for a post-election session to wrap up loose ends from the past two years, and a vote is expected on extension of tax cuts passed during the Bush administration that are due to expire on Jan 1.

Obama and fellow Democrats have said they want to extend cuts for individuals at incomes under $250,000, while Republicans want cuts kept in place for all income levels.

Incomplete returns showed the GOP picked up at least 60 House seats and led for four more, far in excess of what was needed for a majority. About two dozen races remained too close to call.

On their night of triumph, Republicans also gained at least six Senate seats, and tea party favorites Paul in Kentucky, Mike Lee in Utah and Marco Rubio in Florida were among their winners.

Not all the tea party insurgents won. Christine O'Donnell lost badly in Delaware, for a seat that Republican strategists once calculated would be theirs with ease until her stunning upset victory in the primary.

O'Donnell's campaign was hobbled by revelations about her background and personal finances but she squarely blamed the party for the size of her loss. "Republican cannibalism," she said Wednesday on CNN. "Had we united as a party from top all way down, we could have articulately gotten that message out. Instead there was infighting."

In Nevada, Reid dispatched Sharron Angle in an especially costly and contentious campaign in a year filled with them.

His win left three races still unresolved - in Colorado, Washington and Alaska, where Sen. Lisa Murkowski ran as a write-in candidate after losing the Republican nomination earlier this fall.

The GOP also wrested 10 governorships from the Democrats, Ohio and Pennsylvania among them, and gave two back, California and Hawaii.

In New York, Andrew Cuomo won the office his father, Mario, held for three terms. And in California, Jerry Brown was successful in his bid for a comeback to the governor's office he occupied for two terms more than a quarter-century ago.

The biggest win by far was the House, a victory made all the more remarkable given the drubbing Republicans absorbed at the hands of Democrats in the past two elections. Their comeback was aided by independents, who backed GOP candidates for the first time since 2004, by a margin of 55 percent to 39 percent. Women backed Democrats 49-48, after favoring them by a dozen points in recent elections.

The takeaways came in bunches - five Democratic-held seats each in Pennsylvania and Ohio and three in Florida and Virginia. Incumbents sent to defeat included three committee chairmen, Ike Skelton in Missouri, James Oberstar in Minnesota and John Spratt in South Carolina, as well as Paul Kanjorski of Pennsylvania, in Congress more than a quarter-century.

Republicans were certain of at least six Senate pickups, including the seat in Illinois that Obama resigned to become president. Rep. Mark Kirk won there, defeating Alexi Giannoulias.

Democratic Sens. Russell Feingold in Wisconsin and Blanche Lincoln in Arkansas were turned out of office. In addition, Republicans scored big in races for Democratic seats without incumbents on the ballot. Former Rep. Pat Toomey won a close race in Pennsylvania, North Dakota Gov. John Hoeven won easily there, and former Sen. Dan Coats breezed in a comeback attempt for the Indiana seat he voluntarily gave up a dozen years ago.

The GOP gubernatorial gains came after a campaign in which their party organization spent more than $100 million, nearly double what Democrats had.

Among the incumbents who fell were Ted Strickland in Ohio, defeated by former Rep. John Kasich, and Chet Culver in Iowa, loser to former Gov. Terry Branstad.