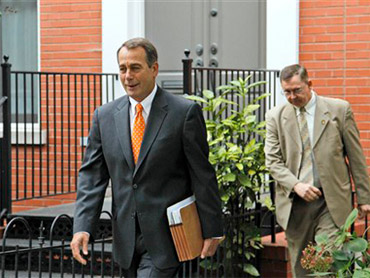 The presumptive next speaker of the House told reporters Wednesday morning the Republican takeover of the House and its success in narrowing the Democratic Senate majority was proof that "the Obama-Pelosi agenda" was rejected by the American people.

"I think that it's a mandate for Washington to reduce the size of government and continue our fight for smaller, less costly and more accountable government," Boehner said.

While the Ohio Republican spoke of popular opposition to the health care law, a CBS News exit poll found that voters were split on the issue, with nearly half calling for its repeal and a roughly equal number saying it should either be expanded or left as is.

"We have a big job ahead of us and that's why you'll see us roll up our sleeves and go to work today," Boehner said, adding that Republicans will take the next several months, before the new session begins in January, to map out their agenda.

Boehner is in line to succeed Pelosi, a California Democrat who became the first woman speaker of the House four years ago. Posing for pictures with GOP Whip Eric Cantor, Boehner said, "The American people were concerned about the government takeover of health care." He added, "I think it's important for us to lay the groundwork before we begin to repeal this monstrosity."

Cantor, R-Va., who is in line to become the next majority leader, echoed Boehner. He said voters made clear they thought the Obama administration's agenda over the last 20 months has failed.

"They have rejected that approach," Cantor said, "and they want to see us return to a sense of limited government and that means, as the leader just said, cut spending and get us back to an era in which we can promote opportunity."

"I hope that we're able to put a repeal bill on the floor right away because that's what the American people want. They understand that this bill is going to bankrupt this country and take away the health care that they -- most people in this country -- know and like," Cantor said.

Couric asked Cantor about the CBS News exit polling showing that 48 percent of the people wanted to repeal health care but 47 percent wanted to leave it as is or in fact expand it. "This is hardly a mandate [to repeal the health care bill] if you listen to our exit polls," she said.

"I just saw the polling that you just showed. It said that 80 percent of Republicans are for repeal and independents are for repeal," Cantor said. "The majority of Americans saying, 'Start over, we don't like the status quo,' and we've got to get costs down and give people a choice and start accentuating the doctor-patient relationship and get government out of the business of deciding the proper care. That's what Republicans are going to be about, Katie. That's what the American people are saying tonight. You know what? This administration's had 20 months, and all the promises that have been made about the most important issue, which is the economy, have been broken, and they are fed up, and they have a reason to be fed up."

Cantor didn't specifically respond to Couric's statement that in the exit poll voters were nearly equally divided on the health care bill. He referenced an earlier poll in which of the 47 percent of respondents who said they wanted to see health care reform overturned 79 percent said they planned to vote Republican in the election. Seventy-five percent of those who said the law should remain in place planned to vote for Democrats. It still remains an issue that falls along party lines.

Couric then asked Cantor about what his party would cut per its pledge to reduce $100 billion in discretionary spending, not including the military or entitlement items.

Cantor talked about fiscal discipline, job creation and capital investment but didn't identify any spending cuts in his response.

"We have put on the table an attempt to put discretionary spending back to 2008 levels, and that means an across-the-board reduction in spending," Cantor said. "If you think about it, Katie, in 2008 the sun rose and set, and we're saying, let's get back to pre-stimulus levels. Let's get back to some fiscal discipline. That's a first step that we can start and bring down the kind of spending that has occurred in Washington. But you know, listen. The American people, they know that they can go about creating jobs. The small-business people are waiting for a signal from Washington that they're going to stop making it more difficult to put capital to work. That's what tonight is about too, Katie. It's about the fact that people are looking at Washington and saying, 'Don't you hear me? We want opportunity. We like success. Stop maligning those who are successful.'"