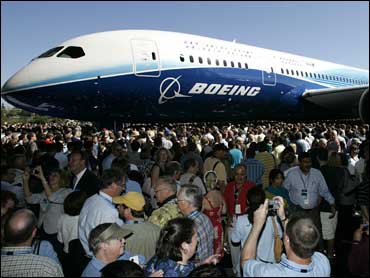 Boeing Co.'s new 787 jetliner will not begin flight testing until mid-November or mid-December, months later than originally planned, because it's taking longer than anticipated to get the first plane ready, the head of the company's commercial airplanes unit said Wednesday.

The 787 is the first large commercial jetliner being made mostly from composites, which Boeing has promised will make the plane more fuel efficient and cheaper to maintain because carbon fiber-reinforced plastics are lighter and more durable than aluminum.

On Wednesday, Scott Carson, chief executive of Boeing Commercial Airplanes, said the first flight will be pushed well into the fall because of delays in completing assembly of the first plane and in finalizing flight-control software.

Even so, Carson said the 787 remains on track to be delivered to its first customer, Japan's All Nippon Airways, next May. Earlier this year, the company said it had more than 675 orders awaiting the 787.

The 787-8, the first of three 787 models Boeing has committed to making, has an average list price of $162 million, though customers typically negotiate discounts on bulk orders.

Boeing unveiled its first midsized, long-haul 787 amid much fanfare in early July, but has spent the past several weeks working to get that plane ready for its maiden flight.

The 787's flight-test program will be much more condensed than that of Boeing's last all-new jet, the 777, which went through about 11 months of flight testing before airlines first started flying it in 1995.

To get the airplane certified on time, Mike Bair, vice president and general manager of the 787 program, has said the company plans to flight-test six 787s at higher rates than it's done with previous planes. Two other planes will undergo static and fatigue tests.