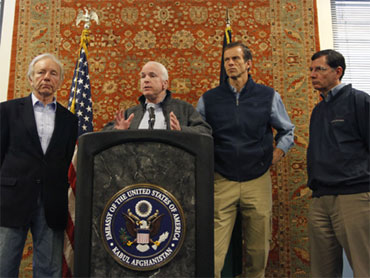 A bomb exploded in a garbage container outside the governor's compound in Afghanistan's restive Khost province on Thursday, slightly injuring the governor, an Interior Ministry spokesman said.

The midday blast broke windows in the building and Gov. Tahr Khan Sabari was cut by the glass but not seriously injured, ministry spokesman Zemeri Bashary told The Associated Press. He said no one else was injured.

Khost borders Pakistan, where a suicide bomber on Dec. 30 killed seven CIA employees at an agency base.

An al Qaeda statement released on the Internet Wednesday claimed responsibility for the attack at the CIA base, which killed seven people working for the U.S. spy agency, including the base chief.

The province is one of Afghanistan's most troubled. On Wednesday, at least 15 people were injured in a blast outside a shop in Khost city, the provincial center.

A Taliban commander in Khost province claimed responsibility for the attack in a text message sent to CBS News, saying his men had planted the bomb at the governor's office.

The Interior Ministry said in a statement that two of the rockets hit a house and the third landed in a garden. Local police said the attack was in the Qalafa neighborhood, about three miles southeast of central Kabul.

There was no immediate claim of responsibility.

But NATO's Afghan operation pointed the finger at the Taliban.

"The Taliban-led enemy has again demonstrated an absolute disregard for the Afghan people and their lives," said U.S. Lt. Gen. David Rodriguez, commander of NATO's International Security Assistance Force, in a statement.

Attacks by the unmanned aircraft are a controversial element of U.S. strategy. Pakistan has publicly condemned them as a violation of its sovereignty and civilian deaths in the strikes stoke anger against the U.S.

But senators John McCain and Joseph Lieberman told journalists in Kabul that they support the strategy.

McCain said the strikes "have knocked al Qaeda and other Islamic extremist organizations off-balance" and that the U.S. is working with Afghanistan and Pakistan to reduce civilian suffering caused by them.

"This is a war and it is a war in which the enemy is being brutal and the only way to stop them is with force," Lieberman said. "And in the particular case of the drones they are a critical element of our effort, our campaign, our strategy to deny the terrorists who are terrorizing the people Afghanistan and of Pakistan a safe haven from which to strike."

Since a Dec. 30 suicide bombing that killed seven CIA employees at a base in Khost province, suspected U.S. drones have carried out five strikes in Pakistan's neighboring North Waziristan region. The area is believed to be a hide-out for militants involved in the CIA attack.