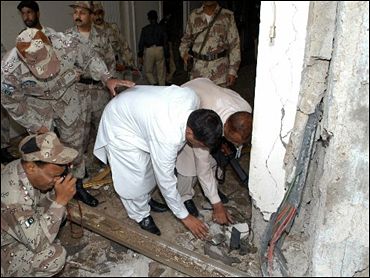 No one took responsibility for the early morning explosion on the main boulevard that leads into Karachi from its international airport. Police said the security guard outside the building died in the blast. A second body was found later.

Explosive experts and dozens of police rummaged through the debris for clues. No one took responsibility for the explosion in the complex that housed 120 offices for businesses ranging from real estate to electronic goods.

"Definitely it is an act of terrorism," Karachi Police chief Tariq Jamil said. "We are investigating."

Jamil said he believes the attackers wanted to destroy the building.

Karachi is Pakistan's largest city with 14 million people and is both the industrial and manufacturing heart of the country. It has been the scene of bitter ethnic, political and sectarian strife over the years.