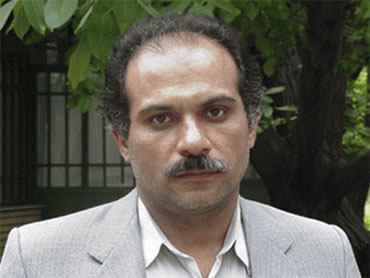 A nuclear physics professor who publicly backed Iranian opposition leader Mir Hossein Mousavi in the disputed June presidential election was killed Tuesday when a bomb-rigged motorcycle blew up outside his home.

The blast, apparently set off by a remote trigger, left a puzzling mix of clues about why a 50-year-old researcher with no prominent political voice, no published work with military relevance and no declared links to Iran's nuclear program would be targeted.

State media identified the victim as Masoud Ali Mohammadi, a professor at Tehran University, which has been at the center of recent protests by student opposition supporters. Before the election, pro-reform Web sites published Ali Mohammadi's name among a list of 240 Tehran University teachers who supported Mousavi.

Hard-line government supporters called at recent street rallies for the execution of opposition leaders. But Ali Mohammadi was not a well-known opposition figure in Iran.

The government blamed the rare assassination on an armed Iranian opposition group that it said operated under the direction of Israel and the U.S. Iran often accuses the two countries of meddling in its affairs — both when it comes to postelection unrest and its nuclear program.

"Since Ali Mohammadi was one of the scientists of physics and nuclear energy, most probably intelligence services and elements of the Mossad and CIA had a hand in his assassination," the Web site of state television quoted Tehran prosecutor Abbas Jafari Dolatabad as saying. The accusation was echoed by the Foreign Ministry.

"Any charges of U.S. involvement are absurd," he said. A U.S. intelligence official said the CIA played no role in the bombing death, speaking on condition of anonymity because he was not authorized to speak publicly on the matter.

A spokesman for the atomic agency, Ali Shirzadian, told The Associated Press that Ali Mohammadi had no link with the agency responsible for Iran's contentious nuclear program. And U.S. experts in the same field said his work had no apparent connection to military uses of nuclear technology.

Iran is under pressure from the United States and its European allies, which suspect Tehran is seeking to develop nuclear weapons. Iran denies that.

"He was not involved in the country's nuclear program," Shirzadian said of the victim.

Another Iranian nuclear scientist, Shahram Amiri, disappeared in June while on a pilgrimage to Saudi Arabia, raising questions about whether he defected and gave the West information on the country's nuclear program. Amiri worked at a university linked to the Revolutionary Guard and his wife said he was researching medical uses of nuclear technology at a university.

Iran's foreign minister accused the U.S. of helping to kidnap him and demanded his return.

In 2007, state TV reported that another nuclear scientist, Ardeshir Hosseinpour, died from gas poisoning. A one-week delay in the reporting of his death prompted speculation about the causes, including that Israel's Mossad spy agency was to blame.

Ali Mohammadi had just left his house on his way to work when the remote-controlled explosion went off, state TV said. The blast shattered the windows of his home in northern Tehran's Qeytariyeh neighbourhood and left the pavement outside smeared with blood and strewn with debris.

Authorities said no one had been arrested in the attack.

Ali Mohammadi was not known as an outspoken or visible supporter of Iran's opposition movement in the postelection turmoil, though his name did appear on the list of professors who backed Mousavi before the vote. That list was published on several pro-reform Web sites in the weeks leading up to the election.

Mousavi and his supporters claim he was true winner of the June election but fraud robbed him of his victory. His supporters staged massive street protests in the weeks after the election, which met with a harsh government crackdown.

Last week, pro-government demonstrators opened fired on the car of Mahdi Karroubi, another leading opposition figure who also ran and lost in the June presidential election. He was not hurt.

The semiofficial Mehr news agency quoted a Tehran University official as saying Ali Mohammadi was not involved in political activity.

"The prominent professor was not a political figure and had no activity in the field of politics," Mehr quoted Ali Moqari, head of the university's science department, as saying.

Ali Mohammadi wrote several articles on quantum and theoretical physics in scientific journals. He was a member of some academic associations focusing on experimental science. In 1992, he received the first doctorate in nuclear physics to be awarded in Iran, from Tehran's Sharif University of Technology.

Michio Kaku, a prominent high energy physics professor at City College of New York, said he had never heard of Ali Mohammadi or his work and a list of papers he published showed his study was clearly not related to making nuclear weapons.

"Nuclear physicists interested in bomb-making would have no interest in these papers," Kaku said. "These papers are highly abstract" with no buzzwords that indicate anything threatening, he added.

Iran also directed suspicion at the exiled opposition group the People's Mujahedeen Organization of Iran. Tabnak, a conservative Iranian Web site close to the ruling establishment, said the group carried out the attack under direction of Israeli agents.

The People's Mujahedeen, however, denied any involvement and said the claim was a government ploy to smear the group.

The Basij militia, which along with its allied Revolutionary Guard played a key role in the postelection crackdown on the opposition, condemned the killing and called the professor a martyr.

The Basij said Ali Mohammadi also taught at the Imam Hossein and Malek Ashtar universities, both linked to the Revolutionary Guard.

The United States and its allies in Europe have been pushing Iran to halt its uranium enrichment program, a technology that can be used to make fuel for power plants but which also offers a possible pathway to weapons development.

U.S. Secretary of State Hillary Rodham Clinton said Monday that the Obama administration has concluded that the best way to pressure Iran to come clean on its nuclear ambitions is to impose sanctions aimed at the country's ruling elite.

Iran is already under three sets of U.N. sanctions for refusing to freeze its enrichment work.