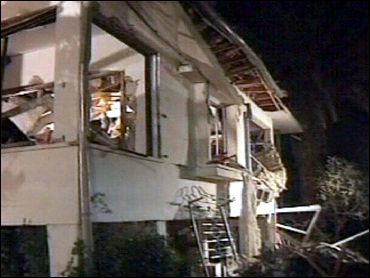 But Israel's foreign minister said his country was still committed to the truce. And the claim was shrouded in some uncertainty: it was not clear whether Monday night's attack was carried out by a splinter group or whether it had received authorization from Islamic Jihad's leaders in advance.

Islamic Jihad leaders in Gaza disassociated themselves from the bombing, and also said they remain committed to the truce, reports CBS News Correspondent Robert Berger.

Meanwhile, momentum appeared to be building toward a visit by Palestinian Prime Minister Mahmoud Abbas to the Israeli Knesset, where he would lobby for a broader release of Palestinian prisoners — addressing an issue that has emerged as a major obstacle to the drive to end 33 months of Mideast violence.

However, the U.S. Ambassador to Israel Daniel Kurtzer has called Abbas (Abu Mazen) a "relatively weak man" who tends to "run away from problems."

According to the Israeli newspaper Haaretz, Kurtzer was speaking Monday evening to about 150 rabbis and Jewish lay leaders in Jerusalem.

A fax to The Associated Press carrying the Islamic Jihad logo threatened more violence if Israel does not agree to a mass release of Palestinian prisoners. "Release the prisoners or the consequences will be grave," the leaflet warned.

The fax identified the bomber as 22-year-old Ahmed Yehyia from the village of Kufr Rai in the northern West Bank. The village is just south of the West Bank town of Jenin, which is known to be a hotbed of radical militants.

Islamic Jihad's political leader in the West Bank, Sheikh Bassam Saadi, said Jenin-based militants probably staged the attack in order to react to Israel's decision not to release prisoners affiliated with the group. But he stressed that "Islamic Jihad... is committed to the (truce) and it remains so today."

And Islamic Jihad's top spokesman in Gaza, Nafez Azzam, also distanced the group from the claim, saying: "We have no knowledge about the claim of responsibility ... and are still committed to this initiative and the truce. ... We stand by our word and our commitments."

Israeli police said the Monday blast leveled a house in Kfar Yavetz, an Israeli village near the West Bank, killing the 65-year-old woman who lived there and an unidentified young man, apparently Yehyia.

The bombing is the first since Palestinian militants declared a cease-fire on June 29; the last Palestinian suicide attack killed 17 people on a bus in Jerusalem on June 11.

"We have an opportunity now that we must not miss, which we have to check out thoroughly and see if it is really genuine," he told Israeli army radio. "Today was an attack ... not a huge attack. Tomorrow the same gang will make an attack with 20 dead and the (peace) process will end at that moment."

Dore Gold, an Israeli spokesman, said the attack "only underscores the importance of the Palestinians fulfilling their road map obligations to dismantle the terrorist infrastructure and disarm the terrorist organizations once and for all."

While the truce has been accepted by most Palestinian groups, some renegade groups within Yasser Arafat's Fatah faction have rejected the cease-fire. Last week, one of these groups claimed responsibility for shooting dead a Bulgarian construction worker near the West Bank town of Jenin.

"Abu Mazen, we know, is a relatively weak man," who tends to "run away from problems rather than try to solve them," Kurtzer said, adding that the U.S. goal in the Mideast is not to back Abbas but to get rid of Yasser Arafat and see the establishment of "a serious Palestinian constitution that will outlive its incumbent."

On Monday, Palestinian and Israeli Cabinet members discussed a proposal for Abbas to visit Israel's parliament to lobby for a large-scale prisoner release.

Israel's Cabinet approved guidelines on Sunday for freeing several hundred prisoners, but said that members of radical groups like Hamas and Islamic Jihad and anyone involved in attacks on Israelis would not be freed.

Israel holds some 7,000 Palestinian prisoners, according to the International Committee of the Red Cross, and the new measures call for the release of only about 400 prisoners.

The Israeli Cabinet said the move was aimed at strengthening the position of Abbas and his allies who support the cease-fire. But Palestinian officials said the release must be expanded.