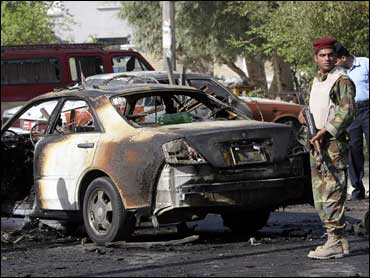 A suicide driver killed three Iraqi policemen and wounded 20 people when he detonated his car at the entrance of police headquarters Tuesday in Basra, raising more fears over the southern city's deteriorating security situation.

Also Tuesday morning, two parked car bombs went off nearly simultaneously in a shopping street in eastern Baghdad, killing six civilians and wounding 20 people, just yards away from a line of pensioners outside a local bank, the police said.

The blasts followed a deadly night in Baqouba, where a suicide bomber struck a U.S.-promoted reconciliation meeting of Shiite and Sunni tribal sheiks after sunset Monday. The U.S. military said 24 Iraqis were killed and 37 others wounded in the blast at the gathering of some 800 people, both Sunnis and Shiites, and blamed al Qaeda for the "horrendous attack."

"Once again, al Qaeda demonstrated the hatred they have for the citizens of Iraq by conducting a despicable attack against its people during one of their most revered celebrations, Ramadan," said Col. David W. Sutherland, the U.S. commander in the Diyala province.

The violence comes amid continued friction between Iraqi and U.S. officials over the Sept. 16 killing of 11 Iraqi civilians allegedly by Blackwater USA security guards in Baghdad, and the U.S. troops' arrest last week of an Iranian officer who the Iraqis claim was here by official invitation.

The U.S. military said the man is suspected of being a member of Iran's paramilitary Quds Force, accused by the United States of arming Shiite militias in Iraq.

The arrest has drawn condemnation from Iraqi leaders. President Jalal Talabani, a Kurd who has been one of America's staunchest allies in Iraq, called it "illegal" and said he met with American leaders to demand the Iranian's release.

He said the Americans did not have the right to arrest somebody inside the autonomous Kurdish area in northern Iraq because the U.S. had handed over security responsibilities to the Kurds.

"Arresting a person inside the Kurdish region is illegal because the security file was handed over to the Kurdish government months ago," he said.

Talabani spoke at a news conference at the Sulaimaniyah airport before departing for New York, where he said he was to attend an international reconciliation conference on the U.N. General Assembly sidelines at the invitation of former President Bill Clinton.

Witnesses and officials said the bomber struck when most of the victims were gathered in the mosque courtyard after Iftar, the daily meal in which Muslims break their sunrise-to-sunset fast during the holy month of Ramadan.

Police Maj. Salah al-Jurani said he believed provincial Gov. Raad Rashid al-Tamimi was the intended target in the explosion. The governor was wounded and his driver was killed. The dead also included Baqouba's police chief, Brig. Gen. Ali Dalyan, and the Diyala provincial operations chief, Brig. Gen. Najib al-Taie, according to security officials. The officials spoke speaking on condition of anonymity because they were not supposed to release the information.

Also wounded was the governor's brother, Sheik Mazin Rashid al-Tamimi, who has spearheaded Sunni-Shiite reconciliation efforts in the province.

The U.S. announced this month that top leaders of 19 of the 25 major tribes in Diyala - 13 Sunni and six Shiite - had agreed to end sectarian violence and support the government in its fight against al Qaeda in Iraq, although the province remains one of the most dangerous in the country with frequent kidnappings and armed clashes.

To the north, five major border crossings between Iran and the Kurdish region remained closed for a second day, after Iran shut them down Monday to protest the U.S. arrest of the Iranian official. Crossing points elsewhere along the 900-mile border were operating normally.

The Iranian, identified by Iran's semiofficial Mehr news agency as Mahmudi Farhadi, was detained by American troops last Thursday at a hotel in the northern Kurdish city of Sulaimaniyah.

In New York, Iranian President Mahmoud Ahmadinejad told The Associated Press on Monday that the border closure was intended to protect religious pilgrims and that "commercial goods and freight transactions continue."

But Kurdish merchants and officials in Sulaimaniyah said hundreds of trucks were backed up on the Iranian side and no goods were being allowed across. This would badly hurt the economy of the region, the most prosperous and stable part of the country.

The Kurds are also the most pro-American community in Iraq, and the U.S. relies heavily on Kurdish politicians as mediators between the Shiite and Sunni Arab communities.

Iran's move appeared aimed in part at driving a wedge between Iraq and the United States at a time of friction between the two countries over the Blackwater incident.