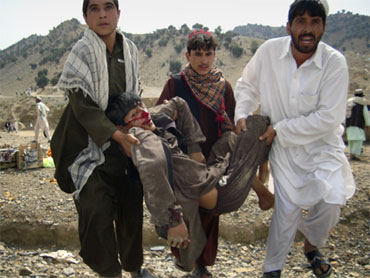 Afghanistan's hard-line vice president expressed hope Sunday that an upcoming national conference will lay the foundation for peace with insurgents as a dozen civilians died in separate bombings in front-line provinces.

During celebrations in Mazar-I-Sharif marking the Afghan New Year, Vice President Mohammad Qasim Fahim, who fought the Soviets and commanded forces that overthrow the Taliban in 2001, said a "peace jirga" planned for late April or early May would try to chart a way to reconcile with government opponents.

"The government will try to find a peaceful life for those Afghans who are unhappy," Fahim said without mentioning the Taliban by name. "God willing, by the help of the people, we will have a successful, historic jirga. ... My dear countrymen, my hope is that this year will be the year of peaceful stability."

Fahim's support would be crucial to efforts by President Hamid Karzai to reach a political settlement with Taliban leaders to end the war, now in its ninth year.

Fahim, who has been critical in the past of any deals with the Taliban, is an ethnic Tajik and former defense minister, while Karzai and the Taliban leadership are ethnic Pashtuns.

The jirga, an Afghan institution where community leaders meet to take decisions by consensus, is expected to formulate a national strategy for reconciliation talks with the Taliban and their allies.

Talking with the Taliban is gaining support in Afghanistan as thousands of U.S. and NATO reinforcements are streaming in to reverse the Taliban's momentum. That has prompted Pakistan, Iran and others to stake out positions on possible reconciliation negotiations that could mean an endgame to the war.

In an interview broadcast by BBC last Friday, the U.N.'s former envoy to Afghanistan, Norwegian diplomat Kai Eide, said he and other U.N. officials had been in discussions with senior Taliban officials since last year but the dialogue has stopped since the arrests of top Taliban figures in Pakistan.

Eide criticized Pakistan for arresting the Taliban's No. 2 leader and other members of the insurgency, saying the Pakistanis surely knew the roles these figures had in efforts to find a political settlement. Pakistan denies the arrests were linked to reconciliation talks.

Talk of reconciliation, however, has done little to slow the violence, which has escalated dramatically over the past three years.

In Sunday's deadliest attack, a suicide bomber killed 10 civilians and wounded seven others when he detonated his explosives near an Afghan army patrol at a bridge in Gereshk, a town in the southern province of Helmand.

Provincial spokesman Dawood Ahmadi said all the victims were civilians, most of them vendors selling goods along the highway. Helmand is the scene of some of the bloodiest fighting in recent months.

Elsewhere, two other civilians died and four were wounded when a roadside bomb exploded near a crowd of New Year's celebrants in Khost province near the border with Pakistan.

Khost police Chief Yaqoub Khan was about 40 yards away from the blast but was not injured. He said Afghan and U.S. forces provided enough security to prevent a deadlier attack "but unfortunately the enemy uses every means and planted a bomb just off the road."

Late Saturday, two other explosions shook the city of Jalalabad in Nangarhar province north of Khost, causing no damage or casualties. Nangarhar police spokesman Ghafour Khan said the bombs were designed "to create fear among the people" during New Year's celebrations.

During the New Year's celebrations in Mazar-i-Sharif, 90 miles (150 kilometers) northwest of Kabul, a large crowd cheered as clerics raised a colorful banner at the shrine of Imam Ali, the nephew and son-in-law of the Prophet Muhammad.

White birds were released into the cloudy sky over the turquoise and light-green shrine as Afghan army helicopters circled overhead, dropping leaflets with New Year's messages from the local governor.

During his speech to the crowd, provincial Gov. Atta Mohammad Noor also expressed support for reconciliation and stressed the need for input from Afghans across all ethnic factions and regions, especially those who have "been damaged by fighting from both sides."

Reconciliation cannot set back democracy or women's rights, he told the crowd.

"If the people participate or share in this process, then there is no doubt the war machine of the Taliban will get weak," he said.
By Associated Press Writer Deb Riechmann