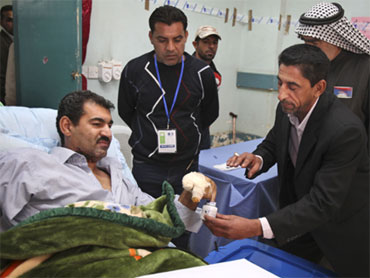 A string of blasts across the Iraqi capital targeting voters killed 17 people Thursday, authorities said, ratcheting up fear in an already tense city as many Iraqis cast early ballots ahead of Sunday's nationwide parliamentary elections.

Insurgents have repeatedly threatened to use violence to disrupt the elections, which will help determine who will oversee the country as U.S. forces go home and whether the country can overcome its deep sectarian divides. Two of Thursday's blasts hit voters outside polling stations.

"Terrorists wanted to hamper the elections, thus they started to blow themselves up in the streets," said Deputy Interior Minister Ayden Khalid Qader, who's responsible for election-related security across the country.

He said that because the bombers were not able to reach polling places due to security measures, they were targeting voters on their way to polling centers. Many of the victims were believed to be security personnel - the main group to cast their ballots during early voting since they will be working on election day.

CBS News correspondent Elizabeth Palmer reports that at least two of Thursday's blasts were blamed on suicide bombers, while it was unclear what sort of device caused the third. All three took place near schools designated as polling stations.

The ongoing attacks show that, despite a huge security blanket, Iraqi insurgents are clearly still claiming some successes, but what remains unclear, says Palmer, is what affect the violence will have on turnout Sunday.

Sunday's vote will see millions of Iraqis decide on a government to guide their country as U.S. forces go home and help determine whether Iraq can overcome the deep sectarian problems that have divided it.

Hundreds of thousands of Iraqis are expected to take part in early voting, a one-day session designed for those who might not be able to get to the polls Sunday.

Early voters include detainees, hospital patients and military and security personnel who will be working election day.

"The special voting has started and the turnout is good," said Karim al-Tamimi, an official at the Independent High Electoral Commission. "The process is going smoothly and safely."

The United Nations Assistance Mission to Iraq estimated that between 600,000 and 700,000 people could vote Thursday. About 19 million of Iraq's estimated 28 million people are eligible to vote in the elections, which see Iraqi expatriates cast ballots in 16 countries around the world.

These are only Iraq's second elections for a full parliamentary term since the 2003 U.S.-led invasion ousted Saddam Hussein, leading to the eventual creation of the Shiite-dominated government in power today.

At a high school in Baghdad's Karrada neighborhood, police and military officials crowded in to the building to cast their ballots, then wiped the now-iconic purple ink - used to prevent people from voting twice - from their fingers.

Many expressed frustration at the government and a desire for change.

"The people who are in government, they did nothing for the country and if they return to power, they will do nothing again," said Jolan Ali Hossein, a police officer who voted for a little-known independent candidate.

Others said they were excited about being able to vote and help usher in a new political era in Iraq.

"In the past we used to make change through violence. Now we have democracy. We are heading toward it," said Hamza Abbas, another police officer. He declined to say who he was voting for.

CBS News correspondent Elizabeth Palmer reports, however, that in Iraq, election fever is still being tempered by election fear.

So wary are officials of attacks like the one near the polling station on Thursday, reports Palmer, that the government is airing public service announcements showing actors dressed as militants loading car trunks with explosives - urging the public to remain vigilant and report anything out of place. Click to Watch Palmer's Evening News Report

Security was tight Thursday, with officials in the western province of Anbar - once the heartland of the insurgency - announcing a vehicle ban going into effect Thursday.

Around the country, hundreds of thousands of police and soldiers have been flooding the streets to prevent attacks by insurgents who have warned they would try to disrupt the vote. The Baghdad airport is slated to be closed election day.

In the city of Baqouba, suicide bombers killed at least 32 people Wednesday in a series of three bomb attacks that officials there said were intended to dissuade people from voting.