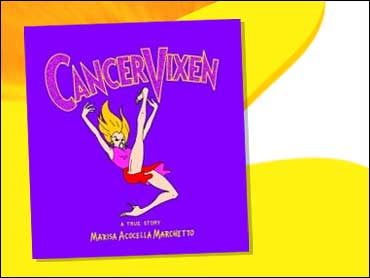 This is where you can get information about books featured on The Early Show that don't have their own, separate stories.

2004 was going to be the best year yet for cartoonist Marisa Acocella Marchetto. Her career had taken off, she was about to get married. And then she was diagnosed with breast cancer.

Marchetto decided to draw her way to recovery, and turned her battle into a graphic art memoir called "Cancer Vixen." It's an inspiring, touching, funny book of cartoons.

To watch a brief animated feature about the book, click here.

To watch Marchetto's appearance on The Early Show, .

We live in a celebrity-obsessed society in which reporters go to great lengths to land the "big get" — the first, big interview with whomever is hot at the moment.

That's the backdrop for Jane Heller's thirteenth novel, "Some Nerve."

But the plot involves the main character volunteering at a local hospital to gain access to a celebrity she wants to interview and, to do research for the book, Heller volunteered at a hospital in real-life. After seeing the impact volunteers have, Heller has become an advocate for them and would like to see more people offering their time to their community hospitals.

Heller discussed "Some Nerve" on The Early Show Tuesday with co-anchor Harry Smith.

To watch the segment,

"Diversity: Leaders Not Labels: A New Plan for the 21st Century"

Stedman Graham, a New York Times bestselling author, educator, and entrepreneur (who is also known as Oprah Winfrey's main man), takes a look at the work world and how it's changing in the face of diversity.

He shows readers how to break out of the box that keeps them from growing to their full potential and reveals that success truly is based on results, performance, and excellence.

He also presents a nine-step plan for readers to grow from who they are to who they can be.

Graham discussed his ideas, and his book, on The Early Show.

To read an excerpt from Graham's book, click here.

"The Homework Myth: Why Our Kids Get Too Much of a Bad Thing"

Kids are back in school now, and that means they're coming home every night loaded down with homework.

It can take hours to finish, and it does a lot more harm than good.

At least, that's the charge made by author and education critic Alfie Kohn in his latest book, "The Homework Myth: Why Our Kids Get Too Much of a Bad Thing."

For one thing, Kohn asserts, it doesn't make kids better students, and it takes away from important family time.

Kohn discussed his conclusions, and book, on The Early Show.

To see an article by Kohn in which he presents his case against homework, click here.

To watch his appearance on The Early Show, .