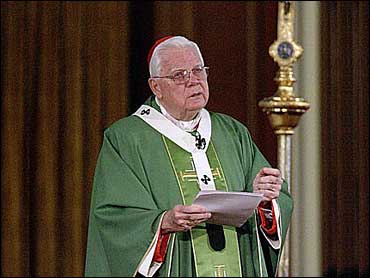 The Roman Catholic Archdiocese of Boston is preparing to file for bankruptcy rather than face a costly legal battle that could drag on for years, according to a published report.

Senior advisers to Cardinal Bernard Law favor filing for bankruptcy, and any decision must be approved by the cardinal, according to The Boston Sunday Globe, citing an unnamed senior church official and two unnamed sources close to the archdiocese.

The diocese could face $100 million in damages in the suits against it.

An archdiocese spokeswoman said Sunday that a decision on bankruptcy had not been made but that every option is being considered.

"Any reports in the media with regards to this are speculative and premature," Donna Morrissey said. "Our first desire is to settle in a fair and expeditious manner."

"That being said, we have to consider all of our options …," Morrissey told the Globe. "We want to support the victims, while continuing the good works of the church."

Law, in his homily Sunday at the Cathedral of the Holy Cross, said, "We pray for the victims of this crime, this sin."

If the archdiocese does file for Chapter 11 bankruptcy, action in all civil lawsuits against the archdiocese would be suspended and it would be protected from new suits, according to the story.

Filing for bankruptcy would mean that the archdiocese is admitting that it is liable, but Law would not longer have to answer questions in pretrial depositions and archdiocese attorneys would not have to release any more priests' personnel files to plaintiffs' lawyers.

Robert A. Sherman, an attorney at Greenberg Traurig, which represents about half of the alleged victims, told the newspaper that it is too early for the church to consider bankruptcy before it even knows the amount of damages it faces. It also contradicts Law's previous promises, he said.

"Cardinal Law has made a commitment to resolving these claims so the victims can obtain closure. For the church to file for bankruptcy would be inconsistent with his posture and would keep those wounds open," Sherman said.

Two lawyers negotiating on behalf of alleged sexual abuse victims said they will walk away from settlement talks unless the archdiocese assures them it does not plan to file for bankruptcy.

"They should either go ahead and declare bankruptcy, or stop talking about it," said Jeffrey A. Newman, also of the law firm Greenberg Traurig.

Newman and his partner, Roderick MacLeish Jr., represent about half the estimated 450 people who have hired law firms to press sexual abuse claims against the Roman Catholic archdiocese.

Newman said of the willingness of the archdiocese to acknowledge publicly it is considering bankruptcy:

"At the very least, it's rank intimidation. No amount of manipulation or grandstanding will affect what we do."

The exact financial situation of the archdiocese is not known because Law does not make those records public.

The U.S. Conference of Catholic Bishops last month decided not to require publication of diocese financial records as part of its new policy on clergy abuse, despite calls by lay groups for information on how much money had been spent to settle abuse cases.

Church finances have been hurt not only by legal expenses but also by a reported fall-off in contributions because of the scandals.