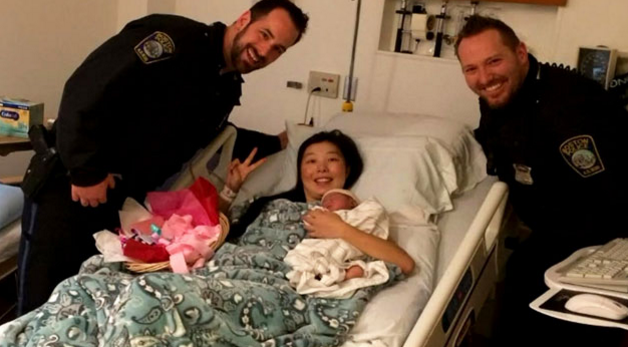 Officers Sean O'Connor and Kevin Rowley, who cover the midnight shift, were about to take a break at around 2 a.m. last Thursday when they spotted a man frantically jumping out of his parked SUV.

"We were out on patrol and we were hungry, so we were heading over to the cafeteria at the hospital nearby to grab some food," Rowley told CBS News.

They had just parked and were walking toward the hospital when they saw the SUV pull up and a man jump out and run into the hospital.

"It was one of those things where we were in the right place at right time. We walked to the car and could see a female and it looked like she was passed out," Rowley said.

Officer O'Connor opened the front door of the car just as the baby was arriving, CBS Boston reported.

"We weren't sure if it was just going to be a sick assist. You know, someone who needed to get into the emergency room or something like that. But when we opened the door, we all of a sudden realized that she was pregnant and giving birth," said Rowley.

Officer O'Connor, who had been with Boston EMS for nine years, immediately began to assist with the childbirth while Rowley ran for help at Brigham and Women's Hospital.

They've worked together for a few years and said it was automatic.

"We work together a lot. We have a lot of nonverbal communication. I'm taking the reins on anything medical because I am a certified EMT. I don't work on an ambulance currently, but I was nine years with Boston EMS," O'Connor told CBS News.

The baby arrived quickly but was quiet.

"The baby looked blue. It's a scary moment from the moment they come out to that first initial breath when they start crying," said O'Connor, a father of two, who had delivered other babies while on the job, including twins.

He cleared her face, nose and mouth to help the baby breathe, and she let out a strong cry.

Rowley, who had run to the emergency room and banged on the locked doors calling for medical help, returned quickly with towels and blankets to swaddle the baby.

Brigham and Women's medical staff then arrived on the scene and took charge of the newborn.

Later in the evening, the officers received word from the the hospital staff that both mother and child were doing well, so they popped in to visit.

The parents, mom Haoyan Sun and dad Zhen Xing, named their new baby Aria. She's their second child. They sent a letter to the Boston Police Department to express their thanks.

"I can't imagine what will happen to me and our baby if Police Officer Kevin Rowley and Sean O'Connor were not with us at that moment," Haoyan Sun wrote.

She added: "After we were settled at hospital, the Police Officer Kevin and Sean visited us two times to make sure we are OK. We also received the beautiful and sweet gifts from Kevin, Sean and his wife. We feel so special and honored!"

The officers said their families loved hearing about their part in the delivery.

On Mother's Day, Rowley said, "We had smiles all across the dinner table. It was a great experience. It was so special, the timing of it, that it was around Mother's Day."