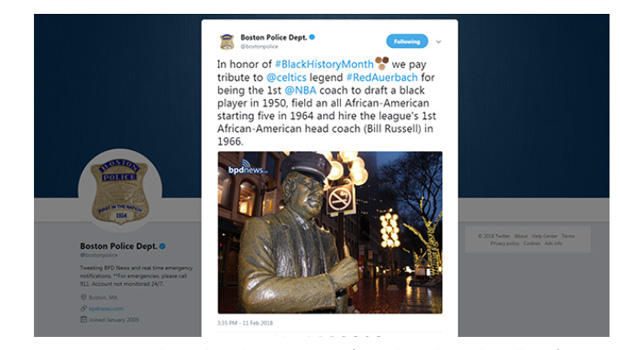 The original post on the department's official Twitter account Saturday night was in honor of former Boston Celtics coach Red Auerbach, an NBA legend. The department said in the tweet it was paying tribute to Auerbach for being the first NBA coach to draft a African-American player, play an all African-American starting lineup and fire the league's first African-American head coach.

CBS Boston reports that one person responded, "As lovely as all those things are that Red did, black history month is not about white men. This is inappropriate."

The station says another asked, "Is this a joke?"

Another user called the tweet "tone-deaf," while another called it a "swing and a miss."

The tweet was deleted less than an hour after it was posted.

The department's account later posted another tweet that night honoring Bill Russell, the first African-American head coach in the NBA.

The police department then apologized: