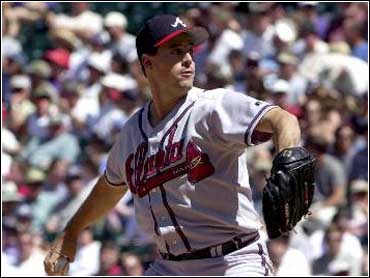 Maddux, pitching about 14 hours after Colorado catcher Brent Mayne earned a victory in relief, was impressive over seven innings and Brian Jordan hit a three-run homer as the Atlanta Braves beat the Rockies 5-2.

"We had to bounce back. We let a catcher beat us, and we thought about that one hard," Jordan said. "We came back with Maddux pitching a great game, and we got him some big hits at the right time."

"It was a good run. What do you say?" he said. "I knew I wasn't going to get a hit every game for the rest of the season, so I wasn't worried about it. Now you've just got to go out and get it going again."

Maddux (14-7), who won for just the second time in seven starts, was as efficient as he was effective, throwing 68 pitches - no more than 13 in one inning.

"That's Maddux," Helton said. "What do you expect? No matter where that guy pitches, he's going to throw a good game. That's why he's had all the success he's had over the years. He's a wonderful pitcher."

Pitching with a stiff neck that has bothered him for two days, Maddux gave up two runs and seven hits with no walks and a strikeout. He also stranded a runner at second three times in the first three innings.

"It bothered me a lot," Maddux said of his neck. "It got worse as the game went on. I was lucy I lasted as long as I did."

Mike Remlinger pitched two perfect innings for his 12th save in 15 chances.

The fast-moving performance was a welcome sight after Tuesday's 4-hour, 26-minute, 12-inning game that included 44 players, a brawl and Mayne's pitching debut.

"In terms of whether or not we were tired or exhausted, I think the motivation from last night's win kind of carried over," Colorado's Todd Walker said. "I don't think it really affected us."

After being shut out in three of Maddux's six previous starts, the Braves gave the right-hander some support against Brian Rose (4-7), who allowed four runs in seven innings.

Andruw Jones' two-out RBI single gave Atlanta a 1-0 in the fifth, and Jordan followed a walk and a single with his 16th homer, making it 4-0 in the sixth.

"I left it up over the plate and Jordan took advantage of it," Rose said. "He did the same thing to me last year when I was with Boston. Just one bad pitch. It was the same situation and the same pitch."

Colorado finally broke through against Maddux in the seventh on Walker's solo homer and a sacrifice fly by Ben Petrick.

Atlanta added an insurance run in the eighth when Keith Lockhart singled home B.J. Surhoff, who was 2-for-2 and scored twice.