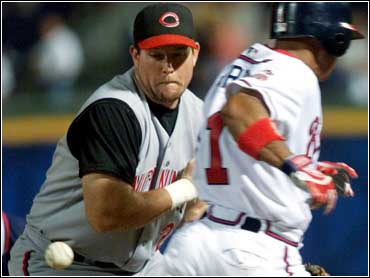 The Atlanta Braves fell out of first place in the NL East for the first time since April 19, losing to the Cincinnati Reds 4-3 Thursday night on Sean Casey's tiebreaking double.

Atlanta dropped a half-game behind the idle New York Mets. The Braves lost three of four to Cincinnati, going 2-6 on a homestand that left them with a 14-15 record in August.

This is first time since 1993 the Braves have not been in first place this late in the season. Atlanta has won eight straight division titles.

The Reds, held hitless for four innings by starter Kevin Millwood (8-10), overcame a 2-0 deficit with a four-run sixth inning.

Millwood broke his nose in a bunting drill Monday and was not expected to make his scheduled start. But after throwing off the mound Wednesday, he said he was ready.

Rookie John Riedling (1-0) got the win with 1 2-3 innings of relief, helped by a baserunning blunder by Andruw Jones in the sixth.

Rafael Furcal opened the Atlanta sixth with a walk and Jones, who earlier hit his 30th homer of the season, was hit by a pitch. Chipper Jones then flied out to Dmitri Young at the left-field wall and Andruw Jones raced past second base but failed to touch it on his return to first and was ruled out.

Sullivan walked the bases loaded with two outs in the seventh before striking out Chipper Jones to end the threat.

Danny Graves pitched the ninth for his 24th save.

The Reds had done little until the sixth, when Pokey Reese led off with a single and Chris Stynes doubled.

Ken Griffey Jr. followed with an RBI groundout and Dmitri Young singled home a run. Casey doubled for a 4-2 lead and one out later, Benito Santiago hit an RBI single.

The Braves took a 2-0 lead in the first inning off Reds starter Pete Harnisch when Furcal led off with a walk and Andruw Jones homered.

Harnisch left in the third inning after being struck on the lower right leg by a one-hop shot off the bat of Furcal.

X-rays of Harnisch's leg were negative. He went 2 2-3 innings and gave up the one hit and two runs.