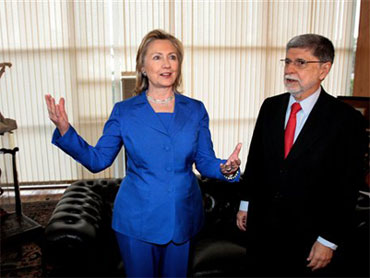 Brazil vowed Wednesday not to "bow down" to gathering international pressure to impose new economic penalties on Iran over its nuclear program if further negotiations might be fruitful.

But Foreign Minister Celso Amorim says Brazil will make its own decision on Iran.

Clinton was in Brazil partly to recruit its vote for new United Nations penalties on Iran. She told a news conference she respects Brazil's position but thinks if there is any possibility of negotiating with Iran, it would only happen after a new round of sanctions is approved.

Before meeting with Clinton, Brazilian President Luiz Inacio Lula da Silva said the best way to deal with Iran is through negotiations and not pressure. Silva is an outspoken opponent of sanctions and is seeking closer ties with Iran.

"It is not prudent to push Iran against a wall," Silva told reporters after a ceremony in Brasilia to launch a new Brazilian internet portal. "The prudent thing is to establish negotiations."

Brazil is a voting member of the U.N. Security Council, and Clinton had aimed during her visit to convince Brazilian officials of the need to penalize Iran for refusing demands to prove its nuclear program is peaceful and not aimed at weapons development.

Silva, who hosted Iranian President Mahmoud Ahmadinejad in Brazil last year and is planning to visit Iran in May, said he did not want to see Iran develop nuclear weapons and would raise the matter when he travels to Tehran.

"I want for Iran the same thing I want for Brazil: to use the development of nuclear energy for peaceful purposes," he said. "If Iran agrees with that, Iran will have the support of Brazil."

But Silva said he would have a "frank" conversation with Ahmadinejad about Iran's nuclear program and that, if Iran "wants to go beyond" pursuing nuclear power for peaceful purposes, Brazil would oppose such a program.

Before Clinton arrived in Brasilia, U.S. officials said they hoped to persuade Brazil to take on greater responsibility for global security, particularly on Iran, as it asserts itself as a growing power in the Americas and on the world stage.

But they face an uphill battle, as Brazilian officials have said it is best for the world to seek closer economic ties with Tehran and to negotiate over Iran's nuclear program so the country doesn't feel isolated.

Before her meetings in Brazil, Clinton had said she would explain to Silva the U.S. position that Iran has the right to atomic energy, but not to weapons. Its refusal to come clean on its nuclear intentions violates Security Council resolutions and must be punished, she said.

The Obama administration, backed by its European allies Britain, France and Germany, is leading the charge to impose tough new sanctions on Iran. They appear to have won the reluctant support of traditional sanctions foe Russia but not that of council members Brazil or China.

Clinton told Congress last week that she expected new sanctions were only 30 to 60 days away, but on Monday she seemed to roll back that timeline, saying only that she thought they would be considered "in the next couple months."

Iran already is under three sets of U.N. Security Council sanctions for refusing to stop uranium enrichment - a potential pathway to nuclear weapons - and other activities, generating concerns that it seeks to make fissile warhead material. It insists it is enriching only to make nuclear fuel for an envisaged reactor network.