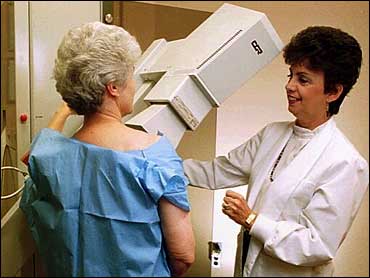 Call it the year of mixed messages: First came debate about mammography's value, then the news that long-term use of the hormones estrogen and progestin raise the risk of breast cancer and heart attacks after all.

Now more headlines, declaring that checking breasts for cancerous lumps once a month doesn't do much good, have some cancer patients and health care providers irate - and telling women to ignore the news and keep on checking.

"I'm on a rampage about the whole thing," says Sherry Goldman, a nurse practitioner who teaches breast self-examination at the University of California, Los Angeles, and who last year found a tiny cancerous lump in her own breast that a mammogram had missed.

"Women are very confused," adds Dr. Gale Sisney of Georgetown University Hospital, who still advises self-exams. "We feel like we're getting ping-ponged around by these different messages."

Yet contrary to popular belief, the value of breast self-exams has long been in question. Federal cancer guidelines don't recommend them. National Cancer Institute patient guides downplay them. So does the American Cancer Society.

Then a study of 260,000 women in China re-ignited the controversy last week. It concluded that women taught to carefully check their own breasts were no less likely to die of breast cancer than those who didn't, but that they did find more non-cancerous breast lumps.

In fact, women often discover breast lumps while dressing, showering or making love, not on that one day a month some set aside for a breast check, he says.

Hence the real key is for a woman to be familiar with what's normal for her breasts, whether that requires a regimented monthly self-check or not, so that she can recognize an abnormal spot, Smith explains. After all, some breasts are naturally lumpier than others, and a change is the key symptom.

Goldman counters that without regular self-exams, women won't be familiar enough with their breasts to notice a new lump.

With the medical profession itself in disagreement, what's a woman to do?

For all of this year's breast-cancer controversies, it comes down to weighing the evidence to decide what's best for a woman's unique circumstances, says Dr. Helen Meissner, chief of the NCI's cancer screening research.

Take mammograms, which came under attack as critics argued that studies suggesting the X-rays cut the risk of dying from breast cancer were too flawed to believe.

The government and most cancer groups call the criticisms overblown and still recommend that women 40 and older get mammograms every year or two.

Certainly mammograms aren't perfect: They miss some cancers; cause many false alarms by flagging benign lumps; and diagnose very early tumors called "ductal carcinoma in situ" that some experts say are over-treated because doctors can't tell in advance which ones will prove life-threatening.

"Like all medical tests, you have to weigh the risks and benefits" in deciding when and how often to have mammograms, Meissner says.

Be sure to pick a radiologist who reads many mammograms, because more experience means more accuracy, Smith stresses.

Some radiologists advise women with very dense breasts to ask for ultrasound scans with their mammograms. Mammograms are less reliable for dense breasts than fatty ones; the cancer society is debating what to advise such women.

These controversies should spur women to insist that scientists focus on finding better ways to detect breast cancer - and test them appropriately so such confusion doesn't happen again, says Fran Visco of the National Breast Cancer Coalition.

Screening aside, the NCI has some clear advice for a woman who does find a lump: