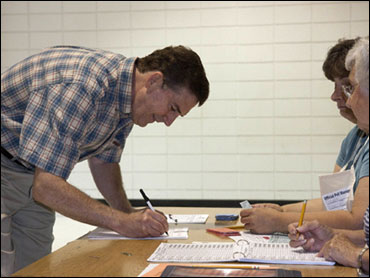 Laurie Stein, a reporter from CBS station WFOR in Miami, got some news last year that no woman wants to hear - she had breast cancer. Instead of keeping her diagnosis and treatment secret, she decided to share her personal story with her viewers.

"Originally," she told The Early Show co-anchor Rene Syler, "I wanted to keep the story as private as possible, but when I got a call from a local gossip columnist looking for a scoop, I made up my mind to tell my story without pulling any punches. So, I got help from my family members, who went behind the camera for my

Here is the bulk of that diary:

"Before I got married, I got a test for a cancer gene, because breast and ovarian cancer run in my family. Unfortunately, the results were bad. I had the gene, which meant that I had a high probability of getting cancer. But I was determined not to let a cancer gene ruin my life or my plans. We got married and tried to put the test results in the back of our minds.

"We thought cancer was something older people got. On November 12th, 2002, I gave birth to a healthy baby girl. And we're absolutely in love with her. We can't take our eyes off her.

"But just eight months later, when I was taking a shower, I felt a small lump. Since I was still breast-feeding, doctors thought it was simply a blocked milk duct, but they scheduled a biopsy just to be safe. The biopsy showed I had a cancerous tumor in my left breast.

"A week later, I was still in shock, and I could not stop thinking about what this meant for my daughter. (My husband Michael and I vowed to fight cancer as aggressively as possible.

"We watched as doctors at Sloan-Ketterring (the renowned cancer medical center) injected my tumor with a radioactive dye, so they could see if the cancer had spread into my lymph nodes.

"We didn't get these results for several days. Meanwhile, I had to prepare myself for the fact that I would have both breasts removed.

"After six hours of surgery, I woke up in pain and I was itching terribly. I had an allergic reaction to the morphine, and I could not stop scratching my face.

"It's at moments like these that you realize how much you need your friends and your family. But the person that Michael and I needed most, our baby, Paulina, was not even allowed in the room. So my sister Susan put a photo of her above my bed. My sister Amy took me and my (intravenous) pole down to the lobby so I could hold her for a few minutes.

"One of the worst things about cancer is that it seems like you are always waiting for more bad news.

Stein next waited to see whether surgeons got all of her cancer.

"The recovery was painful and embarrassing. After the surgery, I had tubes implanted to drain the wounds. For weeks, I had to hide them in my clothes. I was self-conscious and I worried that people would know what I was going through.

"Doctors finally had the lab results from surgery and the news was bad. The cancer had spread to my lymph nodes and the tumor was bigger than they thought.

"Because the cancer spread, I needed aggressive chemotherapy, but what many people don't realize is that chemo can make a young woman sterile. So, before I started chemo, I decided to go through one more medical procedure, in vitro fertilization to remove and then freeze some eggs. Once that was done, I was ready for chemo."

"Within weeks, I lost all my eyebrows, eyelashes and hair, except for the few strands I refused to part with. My doctors prescribed the most intense chemo possible, called dose dense chemo. Every two weeks for four months.

"The chemo is basically poison to kill cancer cells, and it wiped me out. So I couldn't even care for Paulina anymore and Michael had to take over.

"Then I got something called 'chemo-brain.' I couldn't remember names, dates or just about anything. Combine that with the way I looked, and I worried I'd never be the same again.

"Next comes two months of radiation treatments. Although my tumor was gone and we were hoping the chemo stopped any spread, we want to be extra sure. Every morning I lied perfectly still while toxic radiation beamed into my chest and underarms. And I tried not to think about all the radiation.

"After battling breast cancer, I couldn't imagine dealing with another cancer, so I did something very dramatic. I had my healthy ovaries removed. It was a gut-wrenching decision because Michael and I were so in love with Paulina, that we wanted even more children in our family. But I also realized that my first priority was staying alive for the child we already have.

"There are days when I don't feel like a cancer survivor. When it seems like last year's nightmare wasn't even real.

"My energy is coming back, and I can finally enjoy my life again and my time with my husband and daughter.

"I'm doing pretty well. I think the thing that people don't understand though is that you live with the fear every day of it coming back, so I'm trying to handle it day by day."

Is she comfortable with the aggressive nature of the treatment she chose?

"Cancer is very aggressive, and I had a grade-3 tumor, and I have the … cancer gene, which usually means in young women that your cancer will be aggressive. So I felt like I had to fight it as strongly as possible.

"And I think a lot of people don't realize you can look great as after a double mastectomy. My husband says I look even better. People don't realize that it's nothing to be horrified about. I feel good about the way I look, and I feel like I made the right choices. I feel like I won't ever have a time when i look back and say i should of done more."

Llaurie and Michael have only been married four years. How did he handle her illness?

"Well, it was hard for him, obviously. He told me -- when I sat down to actually get out the videotape and talk to him, he said. 'I cried for the first week.' And I didn't even see that. But he's handled it beautifully. He's been there every step of the way."