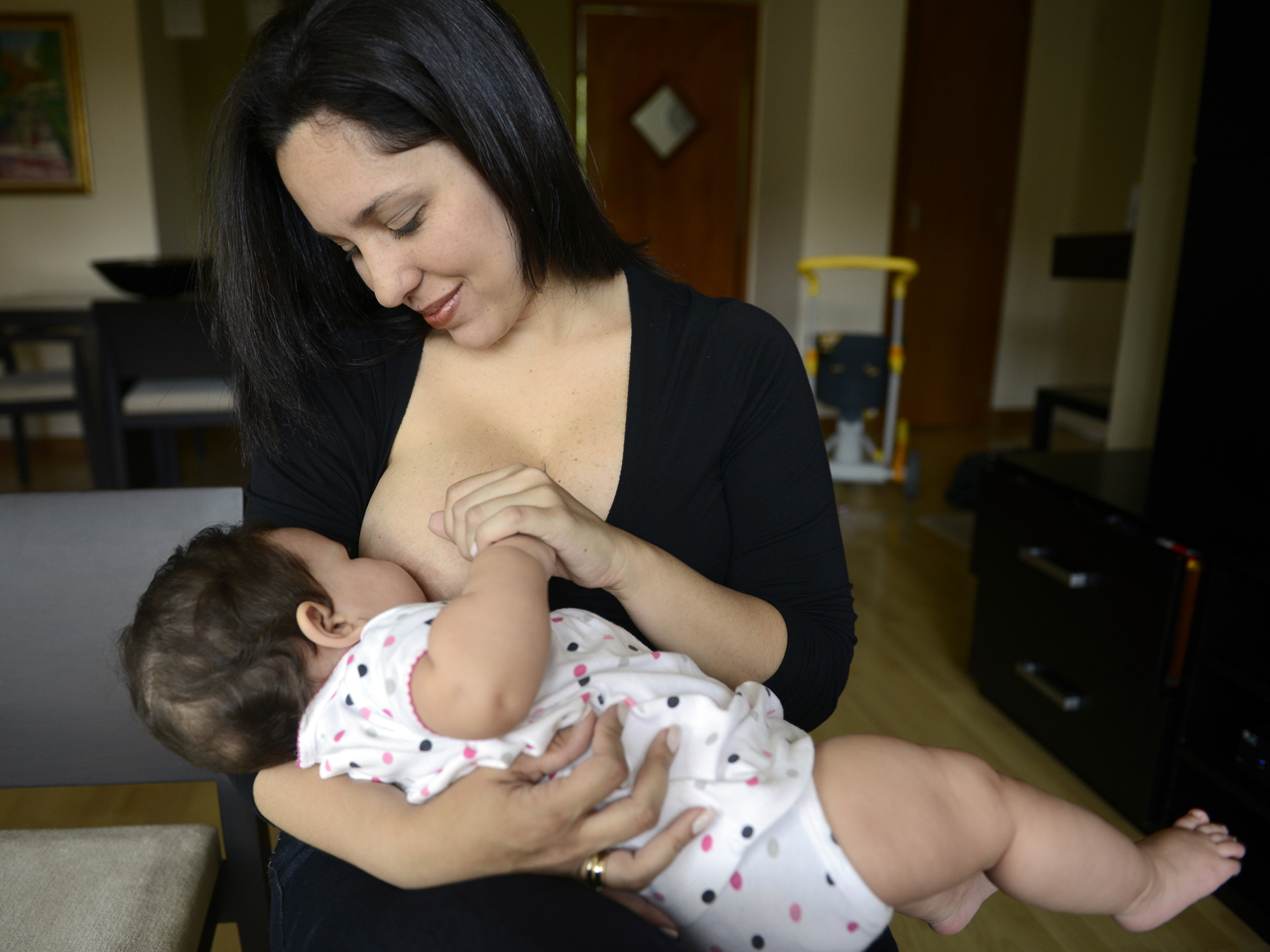 Breast-feeding has been shown to offer many protections against disease for both the mother and the baby. Now, research is showing breast-feeding may lower a mom's risk of developing Alzheimer's disease, the sixth leading cause of death in the United States.

An estimated 5.2 million Americans have Alzheimer's, according to the Alzheimer's Association.

The new study, published online in the Journal of Alzheimer's Disease on July 23, shows that mothers who breast-fed had a significantly reduced risk of Alzheimer's compared to those who did not.

"Breast-feeding affects a woman's physiology in really profound ways that have been shown to last for decades, and this is another example of that," Dr. Molly Fox, a post doctoral researcher at the department of biological anthropology at the University of Cambridge in the U.K., said to CBSNews.com.

Fox said breast-feeding rates vary greatly between mothers, so she was interested in seeing the impact on a woman's overall health and hormone levels.

The American Academy of Pediatrics recommends that babies are exclusively breast-fed until six months of age, and then given supplementary breast-milk for at least 12 months.

In 2010, 77 percent of U.S. moms breast-feed at some point, according to the Centers for Disease Control and Prevention. However, only 49 percent of moms were still breast-feeding when the child was six months old.

Breast-feeding has been shown to lower a mother's risk of Type 2 diabetes, breast cancer, ovarian cancer and postpartum depression. A June study in Obstetrics & Gynecology hypothesized that if mothers breast-fed their infants for at least one year, there would be 5,000 fewer cases of breast cancer, 54,000 fewer cases of hypertension and almost 14,000 less heart attacks in women annually.

For infants, breast-feeding provides valuable antibodies and nutrients. It has been shown to reduce the risk of ear infections, stomach viruses, respiratory infections, atopic dermatis, asthma, Type 1 and Type 2 diabetes, childhood leukemia and a gastrointestinal disease in preterm infants known as necrotizing enterocolitis. It may also increase intelligence and help children move up in social status.

Breast-feeding was also thought to lower the risk of obesity in children, but recent research disputes that claim.

"Breast-feeding is known to have such beneficial effects to the infant, and I think understanding incentives for the mother to choose breast-feeding over bottle feeding has importance for both their health," said Fox.

For her study, researchers looked at a group of 81 British women between the ages of 70 and 100 years old. Their maternal and breast-feeding history, as well as whether and when they had developed dementia were recorded through interviews with the subjects, their families and caregivers. Women who had developed non-Alzheimer's type dementia, women who had a possible brain injury and those who were not mothers were not included in the study.

When all other variables -- including age, education history, smoking and drinking history and the age when the woman first gave birth and went through menopause -- were taken into account, women who breast-fed at some point had a 64 percent reduction in Alzheimer's risk compared to mothers who had children but didn't breast-feed.

The researchers found out that that women who had a higher ratio of breast-feeding to pregnancy time had a lower risk of Alzheimer's. For example, a mother who was pregnant for 18 months (had two kids) and breast-fed her children for a total of six months would have a 23 percent increased chance of developing Alzheimer's compared to a mother who was pregnant for 8.8 months and breast-fed for eight months.

The links were less strong for moms who had a parent or sibling with dementia, but the same trends were still observed.

There are potential reasons why breast-feeding may be able to stave of Alzheimer's, Fox explained. Researchers believe that breast-feeding may be able to rid the body of the hormone progesterone, which helps women with their menstrual cycle, their pregnancies and the act of forming of embryos. Progesterone has been known to limit the brain's estrogen receptors -- the anti-inflammatory hormone estrogen has been shown to protect the brain against Alzheimer's.

Another reason may be that breast-feeding may increase a woman's tolerance of glucose or sugar. Alzheimer's has been called "Type 3 diabetes" because studies show it affects the brain's resistance to a hormone that helps the body regulate blood sugar called insulin, said Fox. Breast-feeding may help the body lower glucose in the brain, which allows the mother to have greater insulin sensitivity. This in turn could help ward off the disease.