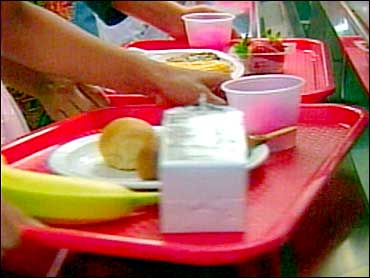 With childhood obesity rates soaring nationwide, one city in upstate New York is taking a radical approach to the problem, using a little bit of bribery to help create healthier eating habits.

In the latest Study Hall segment on The Early Show, Gretchen Carlson reports the strategy is reaching 31,000 students in Buffalo's 54 elementary schools.

Carlson says mornings in those schools now begin with a reminder over the loudspeakers for kids to eat healthy all day long. "Good morning, Power Eaters. Remember: Fruits and veggies rule. Less than five a day is uncool," the student reading the announcement says.

The district calls it the "Power Eater" program, and hopes to increase awareness in the cafeteria by decreasing unhealthy eating habits.

In schools these days, a typical menu includes spaghetti, breadsticks, salad and -- a cup of fruit. But kids' favorite meals at school are still pizza and chicken nuggets; and after the meal, snacks, such as chips and cookies.

"The number of kids who are overweight is shocking," says Dr. Michael Cropp, chairman of Pursuing Perfection, the group behind the Power Eaters program.

Incentives, Carlson points out, such as prizes for students making healthy choices in the lunch line. One day, the prize was a temporary tattoo.

"Children who consume more fruits and vegetables will be eligible for drawings for more significant prizes," Cropp adds. Prizes such as a bicycle, or even a trip, for students who are recoded in the lunch line as Power Eaters for an entire week.

Carlson says there were plenty of students happy to list their favorites. But not all agreed an incentive to eat them was necessary. "It's weird they give prizes to kids just to eat fruit," one student said.

"The students take it, but sometimes it winds up in the garbage," observes Bridget O'Brien Wood, the food services director of Buffalo's public schools. Still, she continues, "We do provide fresh fruits and vegetables on a daily basis to the students."

Why not rid the menu altogether of foods that aren't that healthy, like pizza or chicken nuggets?

"Well, I think we try to provide children with a variety of menu choices. And you can still have a piece of pizza, but, you know, eat it with a chef salad and fresh fruit, and you're probably not going overboard with the calories."

In western New York state, where nearly three quarters of the adult population is considered overweight, getting kids to recognize the benefits of healthy eating is a goal of the Power Eater program.

One third grader chimed in: "You're supposed to eat five fruits a day, every day. And just keep on doing it. Even when it ain't 'Power Eater Week.'"

Encouraging words for the program's chairman.

"Even if the results in the first year are just a change in awareness, so that we can have a greater community awareness of the fact that the risk factors of heart disease are high blood pressure, obesity, diabetes, sedentary lifestyle, and cholesterol -- that's going to be great because kids we've seen in other areas will go back and impact their parents choices as well," Cropp points out.