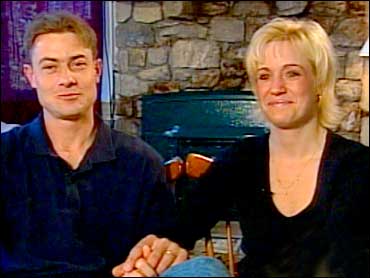 Tara and Chris Patterson have a lively family life. What they don't always have is a lively sex life.

"My intimate relationship with my wife went from oh, couple times a week to maybe once or twice a month or longer," Chris says.

The Pattersons are not alone. Low libidos are claiming the love lives of millions of couples. Sex experts estimate that one out of every three marriages suffers from spouses who have mismatched sexual desire.

That was the problem with the Pattersons' sex life.

Married seven years and mother to 6-year-old Adam and 2-year-old Caden, Tara felt a drop in her libido after the birth of her first son.

"You start to think the first thing — must be hormones," Tara says. "Why wouldn't the feeling be there? It had nothing to do with my husband."

Chris was not sure how to respond. "I was feeling that she wasn't attracted to me or she didn't desire me," Chris says. "I thought there was something going on that maybe she loved me but was not in love with me."

Love was not the issue. With counseling, the two realized their mismatched sexual desire was mainly due to Tara's exhaustion and their different definitions of intimacy.

"For men, they're ready to go at any point in time, and women need to be enticed or romanced, to put them in the mood two or three days before the act even happens," Chris explains.

Tara believes men show love for their wives in the bedroom.

"It's an actual affection," she says. "It's a way they show their love and when we don't accept it, it's a big rejection."

Together, they're learning how to get their sexual appetite back.

They went out on dates and, the couple says, felt like school kids. But with a new house they're renovating themselves, life is showing no signs of slowing down. They say finding time for sex is an ongoing project. But, they say, it's important to make time for a significant other, and it must be made a priority.

Michele Weiner Davis, the author of "The Sex-Starved Marriage," tells The Early Show co-anchor Rene Syler sex is very important in a relationship.

During two decades as a marriage therapist, Weiner Davis has witnessed countless couples being complacent about their lack of intimacy - a formula, she says, for marital disaster.

"Like Chris was saying, for the person yearning for more touch, it's about feeling wanted, it's about feeling connected and feeling loved," Davis says. "And when that major misunderstanding happens in marriages - and it is across America - what tends to happen is that intimacy on all levels drops out. They stop laughing at each other's jokes; they don't sit next to each other on the couch. They stop being friends and it puts marriages at risk for infidelity and divorce and that's really not good."

Davis says the following are signs of a sex-starved marriage: