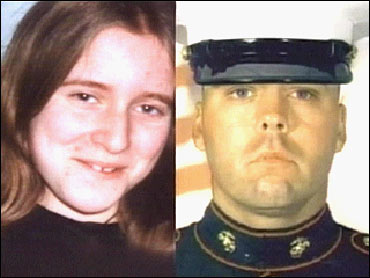 The saga of the 31-year-old ex-U.S. Marine and the pre-teen British girl appears to be over.

British police say the girl, who cannot be named for legal reasons, of northern England has been reunited with her parents, apparently unharmed.

She already was on her way back to Britain when Toby Studabaker, 31, was arrested in downtown Frankfurt, police said.

"He was arrested for abduction under the power of an international arrest warrant," Manchester police Superintendent Peter Mason said.

The schoolgirl had called her parents Tuesday and then again Wednesday.

"She did make a second phone call," said Mason. "She made a phone call this morning to her parents during which she again discussed that she was well, she was not under any duress, she was not being kept against her will. However, she had already parted company with Studabaker when he was arrested.

Birgit Vetter, a spokeswoman for Germany's Federal Criminal Office, confirmed that Studabaker was arrested in Frankfurt at the request of British authorities.

"We'll be looking at bringing him back to this country," Mason said.

The pair had last been traced to Charles de Gaulle airport near Paris, where they arrived on a flight Saturday.

Greater Manchester Police had said Studabaker had no previous convictions.

Leo Studabaker told the British Broadcasting Corp. his brother apparently believed the girl was 18 or 19 and was "very mad when he found she had lied about her age." The two had discussed marriage, Leo Studabaker said.

Earlier Wednesday, the girl's mother said she was "relieved" her daughter was still with Studabaker.

Studabaker left the Marine Corps June 30 after three years. He attended Rosedale Bible College in Ohio in 1993-4, and in March posted on its Web site about his hopes of leaving the Marines.

"Pray that God uses this for me to get out and beginning His work in my life," he wrote. "I want so much to serve Him better."

Studabaker was based in North Carolina with the Marines and had served in Afghanistan.