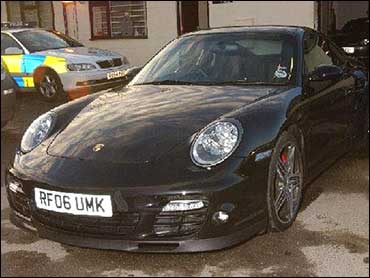 The fastest driver ever convicted of speeding in Britain was jailed for 10 weeks Monday after he was clocked at 172 mph (277 kph) in his company's Porsche.

Tim Brady, 33, was caught Jan. 27 driving the $198,000 Porsche 911 Turbo, which he took without permission from his employer, luxury car rental firm HelpHire PLC.

Brady had nagged his boss to take the Porsche out the day before but was repeatedly told no, the court heard. He returned the next day and took the car anyway.

"(You were) utterly thoughtless of the danger you might be creating for the innocent," he told Brady.

Brady, who admitted dangerous driving at a hearing last month, was banned from driving for three years and will have to take a new driving test before taking to the road again.

He quit his job a day after he was caught near Kingston Bagpuize, about 60 miles west of London.

But while Brady set a record for a speeding conviction in a U.K. car, BBC News reports that there have been faster British drivers -- they just haven't been caught.

One unknown motorcyclist posted footage of himself on the Web cutting through traffic on a wet Yorkshire road hitting 176 mph.

And in the States, Brady would have been left in the dust by a prototype Koenigsegg CCR driven in the 2003 Gumball Rally, which was pulled off the road in Texas after supposedly going 242 mph (in a 75-mph zone).