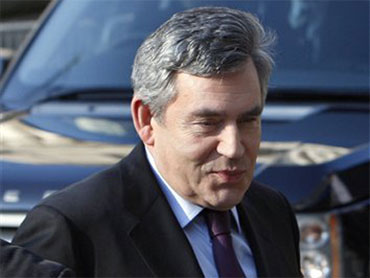 British Prime Minister Gordon Brown defended the decision to invade Iraq, saying Friday before an inquiry on the war that deposing Saddam Hussein was the right thing to do.

In testimony before a looming national election, Brown praised the sacrifice of those who died and immediately addressed a critical question: Did he agree with Britain's choice of going to war?

"It was the right decision and it was for the right reasons," he said.

Brown, who served as Treasury chief from 1997 to 2007 and approved military spending, planned to give around four hours of evidence to the five-person panel.

The inquiry on mistakes made in the war is Britain's third and widest-ranging examination of the conflict, which triggered huge protests and left 179 British troops dead before the country's forces withdrew from Iraq last year. The inquiry won't apportion blame or establish liability, but will offer recommendations on how to prevent errors in future conflicts.

Earlier this year, Prime Minster Tony Blair also stood by the decision to back the U.S. in removing Saddam because the Iraqi dictator was a threat to his region and the world.

Brown was heckled by a small handful of protesters as he arrived for the hearing, entering through the center's front door.

"Gordon Brown was the paymaster for this most unpopular of wars and was the second most powerful man in the government," said John Rees, co-founder of the Stop The War Coalition.

The British leader has faced accusations that he failed to ensure troops had adequate equipment in Iraq and Afghanistan, and has been accused of insensitivity in some of his dealings with bereaved families.

The panel is likely to question Brown on the timing of Britain's withdrawal from Iraq last year - in particular on the decision to pull troops from the southern Iraqi city of Basra despite the prevalence of militia fighters there.

Hearings in the inquiry began in November and have seen Blair, MI6 intelligence agency chief John Sawers, the head of Britain's military Jock Stirrup and a host of ministers and government officials offer testimony.

Brown commissioned the inquiry last year to address concerns over the case made for war, and to scrutinize mistakes made over post-conflict security and reconstruction.

Initially he planned to testify after Britain's national election, which is expected to be held May 6, but - under pressure from opposition lawmakers - later agreed to give evidence beforehand.

Gen. Michael Walker, a former head of the British armed forces, said in an earlier session that the country's five most senior military chiefs had threatened to resign in a dispute with Brown in 2004 over funding.

However, Kevin Tebbit - a key defense official - said that, while the overall defense budget was too small, Brown had not withheld resources needed for the Iraq campaign.

Lewis defended Brown's record on military spending. "It is incontrovertible that the overall budget in that period has gone up," he told reporters Thursday before the hearing.

John Chilcot, head of the inquiry, has said he will seek meetings with former members of the Bush administration in the next few months.

The panel will offer recommendations by the end of the year, but won't apportion blame or establish criminal or civil liability.