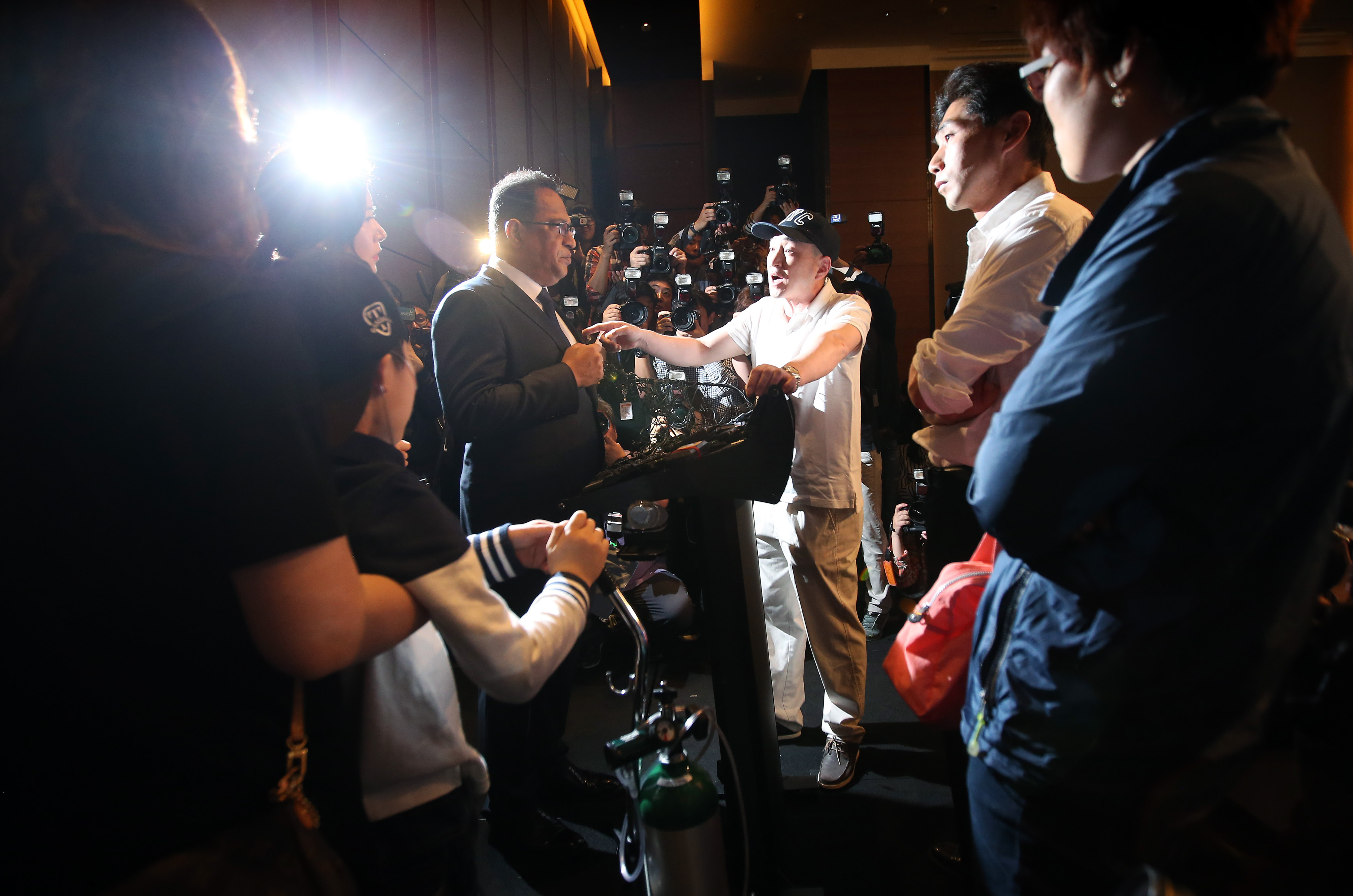 Ataur Safdar, head of the company's Korean division, said the company accepted responsibility and wanted to make amends. He spoke at a news conference, where he was interrupted by angry and tearful victims and family members who cursed and hit him.

A teenager with a big, green oxygen tank, and four other people who were apparently victims or their families, walked to the stage to confront Safdar.

"Can you save the child? What are you going to do?" said a woman, in a scene broadcast live on television. "Why did it take so long?" a man said.

Safdar said the company will come up with a plan to compensate victims. It will also provide 10 billion won ($8.8 million) to a humanitarian fund for them, including 5 billion won it pledged two years earlier. He called the day "an important milestone in achieving progress for victims."

But the victims and families rejected the apology, appealing to the South Korean public to punish Reckitt Benckiser with a boycott. In a press conference outside the prosecutors' office, victims and campaigners lined up the products made by Reckitt Benckiser and asked the public not to buy them.

The apology came as South Korean prosecutors were investigating Reckitt Benckiser and about a dozen other companies for selling or manufacturing unsafe disinfectants. Earlier the company had refused to take responsibility.

In a separate statement after the press conference, civic groups representing the victims said they planned to file a complaint against Rakesh Kapoor, the British company's chief executive officer, and the company's seven other board members for failing to conduct safety tests before the disinfectant's launch in 2001 and until sales were discontinued in 2011.

The victims have already filed a complaint against 10 disinfectant manufacturers and 19 companies that sold the products.

The health risks from the disinfectants came to attention in 2011 with mysterious lung ailments that killed pregnant women. Later that year, authorities said the chemicals PHMG and PGH in the disinfectants that many South Korean households used to cleanse humidifiers were to blame.

Many South Korean households, especially those with kids, use a humidifier during the dry winter season. Many victims were children and pregnant women who had the most exposure to the chemicals emitted by their home humidifiers.

South Korea's government said it would compensate 221 confirmed victims, 95 of whom died. Another 309 people were denied government compensation on the grounds they had not proven their sicknesses were linked to the chemicals.

Civic groups said the government tally understates the number of victims. They estimate that the disinfectants killed 239 and injured 1,289. Officials are investigating and expect more applications for compensation.

Reckitt Benckiser sold millions of bottles of liquid disinfectant, called Oxy Ssak Ssak, containing the harmful chemicals for about a decade and was blamed for 100 deaths.

A report posted by the U.S. National Institutes of Health says the chemical PHMG can pose "a critical health hazard when inhaled in the form of droplets." The NIH has also recorded acute toxic effects for both PHMG and PGH.

An Australian court recently ordered Reckitt Benckiser to pay 1.7 million Australian dollars ($1.3 million) in penalties after ruling that the company misled consumers about the effectiveness of a popular painkiller.

The Federal Court ruled the company deceived Australians by selling Nurofen painkillers marketed as relief for specific ailments, such as back pain and period pain, when all of the products contained an identical amount of the same active ingredient, ibuprofen lysine.