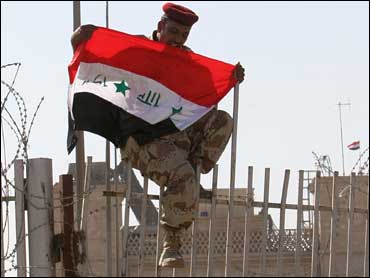 Iraqi soldiers hoisted the nation's flag over the Basra palace compound Monday after British troops withdrew from their last garrison in the city, a move that will hand control to an Iraqi force riddled with Shiite militiamen.

A British statement said the operation began late Sunday night "with all British troops arriving at the airport by midday" Monday.

"There were no clashes or attacks on British forces during the operation. The formal handing-over of the Palaces will happen in the near future," British spokesman Maj. Matthew Bird said.

A curfew was imposed as around 550 soldiers moved from the downtown Basra Palace on Sunday to join 5,000 other personnel at an air base camp on the fringes of the port city.

The decision to leave the palace compound - targeted by daily mortar and rocket attacks - will hand military commanders the option of pulling around 550 troops out of Iraq in the autumn, lawmakers said.

According to CBS News correspondent Larry Miller, reports indicate Britain is ready to pull out most of its 5,500 troops from Iraq, and that government officials have decided to hand over complete control of Basra to Iraqi security forces as early as next month.

Monday's pullout of Basra will also prompt renewed questions over the future of Britain's role in Iraq, though Prime Minister Gordon Brown has refused to set any timetable for the eventual withdrawal of all British forces.

"We're withdrawing personnel," said a British defense ministry spokesman, on customary condition of anonymity. "It's been our long-planned intention to leave the palace."

Defense officials said the complete withdrawal of forces from the base could be completed by Monday and confirmed U.S. officials had been consulted.

In a statement, the defense ministry said it expected to hand over all security responsibilities for the Basra province to Iraqi forces by the autumn.

Brown, who is due to set out future strategy for British operations in Iraq in a speech to parliament next month, was aware of the operation, a government official said.

Ex-leader Tony Blair's decision to cut troop numbers in Iraq from 7,000 to 5,500 in February included an option of pulling out around 500 more soldiers once Basra Palace is handed back to Iraqis.

"The decision is an Iraqi-led initiative and is part of a Coalition-endorsed process," Britain's defense ministry said in a statement.

British forces will operate from Basra Air Station, but "retain security responsibility for Basra until we hand over to provincial Iraqi control, which we anticipate in the autumn," the statement said.

A spokesman for Brown's Downing Street office, speaking on condition of anonymity, said it had "always been our intention to draw down troops in Basra" as Iraqi army and police become ready to handle security duties.

The base, one of deposed Iraqi President Saddam Hussein's opulent homes, has been used by Britain to house soldiers and diplomatic staff since the 2003 U.S.-led invasion.

"This is not an unexpected move, but the families of the service personnel involved will want to know that every possible precaution has been taken to maximize their safety during this period," opposition Conservative party lawmaker Liam Fox said.

U.S. officials have raised concerns about the prospect of British troops leaving the city, which has seen rival armed militia groups battle for control since the fall of Saddam.

The International Crisis Group, a Brussels-based think-tank, said in a June that unconstrained militias were destabilizing Basra and that locals believed British forces had been driven out.

"Relentless attacks against British forces in effect had driven them off the streets into increasingly secluded compounds," the report said. "Basra's residents and militiamen view this not as an orderly withdrawal but rather as an ignominious defeat."

Retired U.S. Army Gen. Jack Keane, who was vice chief of staff at the time the Iraq war was launched in 2003, said in an interview last week that London had never deployed enough troops to properly stabilize the region and allowed a bad security situation to deteriorate.

Officials in Washington are likely to have sought assurances that any withdrawal of British troops will not impact on the security of land supply lines from Kuwait to Baghdad.

"This is a thoroughly sensible military decision," said opposition Conservative lawmaker Patrick Mercer. "It will allow more troops to be withdrawn from Iraq in the autumn, just as Britain increases its numbers of troops in Afghanistan."