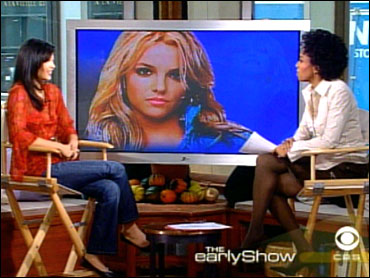 Britney Spears may be one of the most recognizable stars on the planet, but she says that, despite her fame and fortune, the world doesn't really know who she is.

Spears sat down for an interview with MTV News Correspondent Suchin Pak and talked openly about everything from her love life to her provocative new album.

Pak asked, "When you write songs that push that envelope, do you find it empowering?"

Spears replies: "I don't think I push my envelope. I think you go for things yourself and the way you really feel them. Like, it's going to come out sooner or later. It's exhilarating to express yourself and get the things out there that you want to say. Yeah, I think it is empowering."

In the time she spent with Spears, Pak tells The Early Show co-anchor Rene Syler she was able to pin down just who the star really is.

Pak says, "A lot of people are surprised and forget that she's just a 21-year-old southern girl. I mean, when you sit down with her immediately and she opens her mouth and you have your first conversation with her, you realize just how young she is. And you forget that because on stage, she is just huge, like,a sexual powerhouse. Everything she does is so grand and big and you meet her and she's just this tiny little girl. She's just 21"

Pak notes that what viewers see is not so much a result of a marketing campaign or well-crafted image.

"It is about a young girl that's always wanted to perform. She's a performer," Pak says. "She's an entertainer. She'll be the first to tell it to you, she's not a singer or songwriter; she's an entertainer. I asked her, it's like a split personality. Who she is on stage isn't who she is behind the scenes. Who she is out there taking her clothes off and wiggling her butt, that's not who she is in person. In person, she's actually quite shy and very self-conscious and reserved."

So how can it be that a shy and reserved person is in the tabloids wearing provocative clothing?

Pak explains, "I think that if you know people who are performers on stage and actresses or whatever it may be, the bottom line is what you do on stage. You just take on a different persona - that's what makes her so successful. Lights come on and, suddenly, it's Britney Spears and the lights go off and she's just Britney."

In Pak's interview Spears talks a lot about this being a big year for her, a growth year with a lot of firsts for her.

Spears said in the interview: "I know this sounds really cheesy and not a big deal to most people, but getting downstairs to get a cab and going to visit a friend by myself or, you know, I don't know, that sounds like such a normal thing to do. But for me, because I'm so used to people being around me."

Pak notes, "It's huge for her in her life. She's always had an entourage for her entourage. She is literally so guarded you can barely see the top of her head when you're trying to get to her in a room, but she's trying a lot of first things this past year.

As for her relationship with Justin Timberlake and the fact that he cast a Britney look-alike for his "Cry Me" video, Pak says, "I was kind of puzzled. But, you know, I don't judge anybody because that's what he had to do. I probably wouldn't have handled it that way. But, you know, guys egos."

First love is bad enough, but Spears had hers splashed everywhere. Pak adds, "Not only splashed everywhere, but it seems that he almost launched his career (with that) and Justin has had a very successful career on the breakup and sort of like the fame of Britney. And that's why he's able to stay in the press so long and that's why people are still interested. This is a year ago, yet, we're still all talking about it. I think she was almost relieved to get all of this out, that she was just upset that her heart was broken. She wanted to kind of clear the air about that."