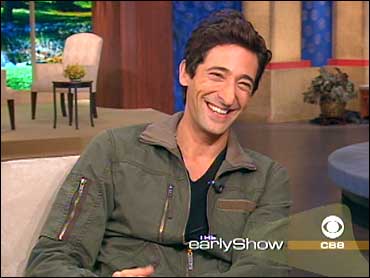 Adrien Brody has built a successful career mixing blockbusters such as "King Kong" with critically acclaimed dramas like "The Pianist." Now he's playing a detective investigating a mysterious death in the new thriller "Hollywoodland."

Many people have forgotten the scandal caused when actor George Reeves, the original superman, was found with a bullet in his head. But that story of sex, romance and betrayal will come to life for a whole new generation, including Brody

"It was before my time," he told The Early Show co-anchor Hannah Storm. "But the interesting thing is the character. The detective doesn't know that much about the events that took place. I didn't have to know all the details, but it's unclear what happened."

Some people think Reeve's scandalous death has still not been solved even though it was ruled a suicide. Brody said it remains an intriguing mystery because the movie studios were so powerful that they controlled much of the information surrounding Reeve's death. Even police worked for the studios, Brody said.

"The fact that Reeves was having an affair with the studio executive's wife, there could have been other motives and easy to cover it up," he said.

Brody plays a fictional detective who investigates the death, and also leads a troubled life. He said the role was challenging because detectives have been played so well in other movies.

"What I tried to do, and discussed with Allan Coulter, who directed the film, is to focus on the reality of my character's life, which is actually that middle class guy in the valley, separated from his wife but has aspirations of being a much bigger detective than he is," Brody said.

After he won an Academy Award for best actor for "The Pianist," Brody said he has upped the ante for himself. In his next movie "Manolete" with Penelope Cruz, he plays a legendary bullfighter and actually has to fight bulls.

"Well, people have been killed fighting them, but they are less dangerous, obviously, because they are smaller and their horns are smaller and there's — there are less risks. But it was interesting," he said. "It's a fascinating world and one that I knew nothing about growing up in New York."