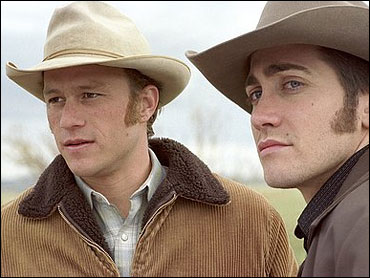 When "Brokeback Mountain" opened last month, it was universally praised by critics, though the public seemed to think of it as "the gay cowboy movie."

But that label seems to be falling by the wayside as the film piles on awards and heads for the top of the box office,

according to
The Early Show entertainment contributor and People magazine Editor at Large Jess Cagle.

He says "Brokeback" was considered a major financial risk, but has raked in close to $45 million dollars so far, more than triple its modest budget.

And what's most surprising, Cagle observes, is who's driving the film's ever-growing popularity.

"Brokeback" is the story of a doomed love affair between two Wyoming cowboys.

Star Heath Ledger was drawn to the role despite the film's sensitive subject matter because "the story was so heavy and beautiful, and (because of) the opportunity to investigate this character, this incredibly complex figure."

You might think big cities are driving the film's success, but it goes much deeper than that, Cagle notes.

"What's driving the astonishing grosses for this movie," says Focus Features Co-President James Schamus, "is the numbers coming out of places like Little Rock (Ark.) and Billings, Mont. and Salt Lake City and Columbus (Ohio) and Pittsburgh. The film is doing business in every corner of America."

City slickers and country dwellers alike are lining up for "Brokeback," despite concerns that some moviegoers would shun the film because of its untraditional theme.

"It has become," Schamus says, "officially uncool as a guy to say 'No' to your girlfriend to this movie. It's something that you're now in a zone where, if you say 'No,' you just don't look that cool anymore."

Cagle concurs: "It's being driven by women. Men will not seek out a love story," whether heterosexual or homosexual, "but they will go with their wives and girlfriends, and that's what's happening here."

"I wouldn't have seen it without my wife taking me to see it, but after I saw it, it was a great love story. Fantastic," says one.

"The film is a love story. I thought it was a great movie," says another.

"If you ask me, it could've been a girl versus a guy. To me, it was just a love story. It didn't matter that it was two guys," added another.

Filmmakers believe the "Brokeback" craze is being fueled by the need for such a good love story on the big screen.

Says Schamus, "I don't think there's been a screen romance of this scope and scale coming out of Hollywood in years and years. It just hasn't happened. I think people are just responding first and foremost to the emotion and the honesty and intensity of the experience."

Cagle adds that the producers "were very smart. They marketed the film as a love story. You look at the poster it looks like the 'Titanic' poster.

To cement its place on Main Street, the film has become a favorite topic on the late night comedy circuit.

On "The Late Show with David Letterman," the comedian quipped that the movie "sure brings new meaning to the word 'cowpoke.' "

Also, a line from the movie is making its way into popular lexicon: "I wish I could quit you."

But Cagle says Ledger is up against tough competition in the best actor category he's expected to become part of.