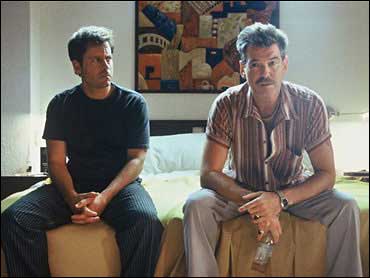 After a successful run in the movies as James Bond, Pierce Brosnan has moved on to a new chapter in his career as a successful producer and actor.

Brosnan sat down with The Early Show's Harry Smith to talk about his latest big-screen project, "The Matador."

In the film, Brosnan plays a conflicted hitman.

"[It's] a crisis of confidence, yeah," Brosnan said. "It's an outrageous little script that came across our desk and it's turned out to be this outrageous movie, too, written by Richard Shepard.
I play Julian Noble and he's in Mexico City and he realizes he can't kill people anymore. He's having a hard day at the office."

Noble is a loner who reaches out for a friendship with a businessman played by Greg Kinnear.

"It's really what happens when two guys meet at a bar," said Brosnan. "They meet in a bar in Mexico City and therein hangs the tale. My character is lost, adrift and saturated in booze and who knows what. Greg's character is this very affable, charming fellow from Denver in Mexico City for the weekend. We become good friends."

Smith says the role was fun to watch. Did it allow Brosnan to stretch his legs as an actor?

"It was a bit like a play, this film. The scenes are very long with 12- to 15-page scenes. It was a three-hander between Hope Davis, Greg and myself," he said.

Brosnan says the role was "complete liberation. I could go wherever I wanted to go with the performance, with the character. You kind of like the character. There is a vulnerability to this man. He is a pathetic vulgarian.

"When I read it I just howled," he said. "Richard Shepard, who wrote this and directed it, sent it to us as a writing sample for Thomas Crown. We're trying to do Thomas Crown II, technically three. Everyone loved it in the office and we decided to go to Mexico City."

The film was first seen at Sundance in early 2005. Roger Ebert said it was the best acting Brosnan has ever done.

Brosnan has received a Golden Globe nomination as best actor in a musical, movie or comedy for his performance.

As for life after Bond, how does Brosnan really feel?

"It's a new chapter in my life and a new chapter for Daniel Craig who's going to do a great job. He's a great actor and a good mate and I wish him well."

Smith says see the movie for no other reason than the showstopping scene where Brosnan runs through a hotel lobby in nothing but his shoes and underwear.

Up next for Brosnan is a Civil war-era movie with Liam Neeson.