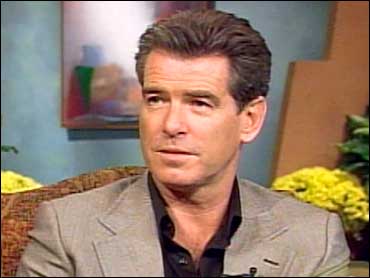 Pierce Brosnan played super-spy James Bond in four films, and says he was negotiating for a fifth when he was suddenly told his services would no longer be needed.

"That's it. It's over. It's over," he told The Early Show co-anchor Harry Smith. "I thought we were going to do a fifth. I thought a fifth and no more. They invited me back and I said, 'Yeah, this would be wonderful.' And then they changed their mind in the middle of negotiations.

"It's their prerogative. Maybe it's a blessing in disguise. I had a great time doing it, a great decade, four films, very successful. But it's time to move on.

"It comes with a regret of not getting a chance to do it a fifth time but, at the same time, so much goodness has come from it, in the sense that I have my own company, and I can make my own films, like 'The Thomas Crown Affair.' You know, (the Bond movies) are tough things to do. They're tough movies to make, and (I've) been there, done that."

Brosnan confirmed to Smith that a sequel to "The Thomas Crown Affair" could be in the works. "We're talking about it. We signed a writer last week, so we're going to set sail and try to have crack at it. It's a tough nut to do, and people have asked us and asked us and the studio has kind of put the squeeze on us a little bit."

He concedes the first "Crown Affair" was "very slick. Very beautiful. So I don't know if we can get away with it again. We'll give it our best shot."

In his latest movie, Brosnan plays a retired jewel thief being chased by an FBI agent in "After The Sunset." It co-stars Woody Harrelson and Salma Hayek. Brosnan describes it as a combination romance, buddy movie and comedy.

He concedes he "didn't have to stretch" his acting abilities for "After the Sunset."

"I've kind of been on this ground before, with these kind of characters," Brosnan says. "But because it had an ensemble feel to it, it was appealing, and then Brett Ratner came on board as director and did a fantastic job."

Brosnan agreed with Smith that he's been lucky to play opposite many fabulous leading ladies: "I've had some wonderful times with some fantastic actresses, I must say. Long may it last, you know?"