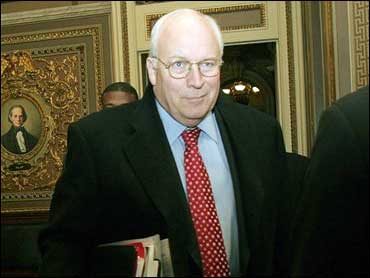 The Republican-controlled Senate passed legislation to cut federal deficits by $39.7 billion on Wednesday by the narrowest of margins, 51-50, with Vice President Dick Cheney casting the deciding vote.

The measure, the product of a year's labors by the White House and the GOP in Congress, imposes the first restraints in nearly a decade in federal benefit programs such as Medicaid, Medicare and student loans.

"This is the one vote you'll have this year to reduce the rate of growth of the federal government," said Sen. Judd Gregg, R-N.H., chairman of the Senate Budget Committee, in a final plea for passage.

But Senate Democratic Leader Harry Reid of Nevada countered that the GOP was advancing "an ideologically driven, extreme, radical budget. It caters to lobbyists and an elite group of ultraconservative ideologues here in Washington, all at the expense of middle class Americans," he said.

The roll call delivered less than the final victory Republicans had hoped for.

In maneuvering in advance of the final vote, Democrats succeeded in forcing minor changes.

That requires the House to vote on the bill before it can be sent to President Bush for his signature. Passage is all but certain, but the timing remains in question, since most House members have returned home for the holidays.

Within a few hours, Republicans suffered a sharp setback on a second major conservative priority, legislation to open the Arctic National Wildlife Refuge to oil drilling. Supporters of the measure, led by Sen. Ted Stevens, R-Alaska, failed to overcome a Democratic filibuster. The vote was 56-44, four short of the 60 needed to prevail.

With senators of both parties eager to adjourn for the year, other major bills remained in limbo.

President Bush made a last-minute pitch to rescue the anti-terror Patriot Act from a Democratic-led filibuster. "This obstruction is inexcusable," he said at the White House. "The senators obstructing the Patriot Act need to understand that the expiration of this vital law will endanger America and will leave us in a weaker position in the fight against brutal killers."

Critics of the legislation say it could pass easily, if Republicans would agree to include more protection for the civil liberties of innocent Americans.

Fifty-two senators signed a letter Wednesday signaling support for a three-month extension of the Patriot Act, so negotiations can continue.

By themselves, the deficit cuts included in the five-year bill would amount to only 2.5 percent of projected shortfalls totaling $1.6 trillion over the same time frame. Republicans said the significance lies in more than mere numbers, adding that programs such as Medicare and Medicaid threaten to consume an unsustainable amount of federal revenue if their growth is not trimmed quickly.

Home health care payments under Medicare would be frozen at current levels for a year under the bill, Medicaid regulations would be changed to make it harder for the elderly to qualify for federal nursing home benefits by turning assets over to their children.

Lender subsidies are reduced as part of an attempt to squeeze $12.6 billion from student loan programs. Another provision raises $3.6 billion for the Pension Benefit Guaranty Corp., the federal agency that protects certain pension plans. The money would come from an increase in the premium employers pay for each covered worker or retiree, and from a fee on companies that end their pension plans.

Billions more would come from programs unrelated to benefit programs. The legislation assumes $10 billion in federal receipts from the sale of part of the analog spectrum, for example.

Cheney cut short a tour of the Middle East to return to the United States to take part in the critical session-ending business in the Senate.

"The vice president votes in the affirmative," he said, speaking only a few words as dictated by Senate custom.

Presiding over the Senate is among Cheney's constitutional duties, although vice presidents rarely attend sessions and can only vote to break ties.

Cheney wasn't the only one who made an unexpected trip back to Washington. Sen. Chris Dodd, D-Conn., flew back on Tuesday night. He has been recuperating at home from knee replacement surgery, and he made his way into the Senate with the aid of a walker.

All 44 Democrats voted against the budget measure, as did Sen. James Jeffords of Vermont, an independent. Five of 55 Republicans crossed party lines to oppose the bill as well. They included Sens. Olympia Snowe and Susan Collins of Maine, as well as Sens. Gordon Smith of Oregon, Mike DeWine of Ohio and Lincoln Chafee of Rhode Island. Of them, Chafee, DeWine and Snowe are seeking re-election next year.