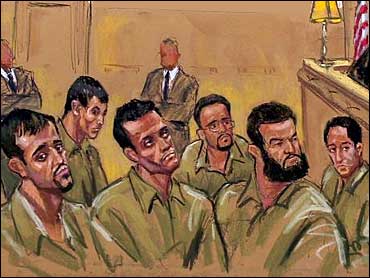 
Even the five jail-bound members of the so-called "Buffalo Six" alleged terror cell have very little to complain about in the wake of a judge's decision Tuesday to deny their bail request. Sure, the judge rejected their arguments, but at least he heard them. And that's more than Jose Padilla or Yasser Esam Hamdi can say about the way the criminal justice system has so far handled their legal troubles.

Never mind the case of Sahim Alwan, the lone member of the Lackawanna, N.Y., group who may actually be released pending trial on terror-aid charges, the "Buffalo Five" — the men who won't get out on bail — ought to look on the bright side of their current predicament. They could have had it far worse. They were provided far more due process, for example, than Padilla, the U.S. citizen initially accused of being a potential "dirty" bomber, or Hamdi, the U.S citizen captured fighting in Afghanistan with the Taliban.

Padilla and Hamdi were unilaterally classified months ago by President Bush as "enemy combatants" and since then have been held in military confinement, incommunicado and without charges being brought against them. So far, while their appeals wend tortuously up the legal ladder, they haven't received their day in court; haven't had a judge evaluate the substance of the government's allegations against them; haven't heard a judge talk in open court about the need to avoid "strong emotions of a negative nature" against men like them spurred on by a "feeling of paranoia in many of the hearts and minds of the inhabitants of this great nation."

Indeed, the Buffalo Six — men accused of providing material support to al Qaeda after visiting terror training camps in Afghanistan last summer — have had a romantic fling with the justice system compared to the treatment given to Padilla and Hamdi.

Alleged terror-cell suspects Yahya Goba, Sahim Alwan, Shafal Mosed, Yaseinn Taher, and Faysal Galab saw Magistrate Judge H. Kenneth Schroeder, Jr., the author of those eloquent words above, practically contort himself during the course of the long detention hearing to ensure they received due process. Judge Schroeder heard arguments, evaluated evidence, gave both sides an opportunity to supplement the record weeks after the initial hearing, and then reached a decision that may be popular in some circles, unpopular in others, but legally supportable everywhere.

First, the magistrate rejected the government's claim that the defendants had been charged with a "crime of violence" for purposes of the federal bail statute. Had the judge accepted that argument, it would have been easier as a legal matter for the feds to push for a denial of bail for all six men since few defendants charged with "crimes of violence" get released on bail.

This gateway decision then required the judge to evaluate whether the men posed a "serious risk" of fleeing, obstructing justice or being a danger to the community — a much tougher burden for the government to meet. At the same time, Magistrate Schroeder required prosecutors to prove their bail case by "clear and convincing evidence," a standard of proof and persuasion that is above "probable cause" and "a preponderance" and just below "reasonable doubt."

Using that high standard, the judge was convinced, he wrote in a 32-page ruling, that the men traveled to Pakistan and Afghanistan in the spring and summer of 2001. He was convinced, he added, that at least three of the men at the time "were shown, among other things, "a movie about the destruction of the USS Cole and how al Qaeda committed that terrorist act." The men then traveled to an al Qaeda training camp, Magistrate Schroeder wrote, where some considered themselves members of al Qaeda and where at least a few of the men heard Osama bin Laden himself give a speech about the goals of the terror organization.

Significantly, the judge ruled, materials found in the home of Yaseinn Taher caused him "serious concern in the context of the issue before this Court." The materials consisted "of a lengthy dissertation on the justification of suicide as a form of 'martydom' under Islam," Schroeder wrote, and "could certainly be said to be inflammatory so as to fire one's passions with intensity of a dithyrambic nature." Dithyrambic, for those of you without a dictionary on you at the moment, means frenzied or impassioned.

This evidence, the magistrate reasoned, raised several questions about the circumstances which brought the men to that terror training camp; questions the defendants for the most part were unable to answer to his satisfaction. "The United States Constitution," Magistrate Schroeder concluded, "does not require that the Court abandon or disregard common sense and the drawing of reasonable inferences based on circumstantial evidence in making its determination."

That's why five of the Buffalo Six won't be seeing the light of day any time soon and why Sahim Alwan, who left the terror camp early and who 'fessed up to authorities when questioned about his activities, gets a slightly better deal. Alwan's out on bail — or could be if he posts his bond — but he'll be monitored so closely that he won't be able scratch an itch without the feds knowing about it.

In the end, and putting aside all of the legal niceties, the magistrate judge decided that it was better to be safe than sorry; better to order the detention of five of the men for a few more months than release them and worry at night about whether they are, indeed, part of a sleeper cell just waiting to be triggered. It's a decision that provides little solace to the family and friends of the detained men, to be sure, especially if they are later acquitted of the charges against them. But on the sliding scale of justice, both procedural and substantive, the Buffalo Six got a much better deal than a lot of other men over the past year who also have drawn the attention of the federal government as it fights the war on terror.