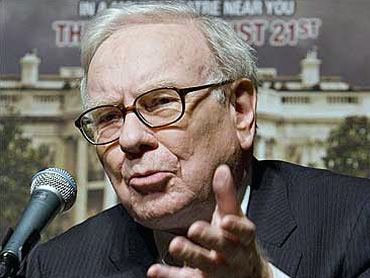 (AP Photo/Nati Harnik)
Billionaire investment guru Warren Buffett says the U.S. economy is "now out of the emergency room and appears to be on a slow path to recovery" but the massive federal spending to stave off financial collapse has left the country in "uncharted fiscal territory."

Buffett, the CEO of Berkshire Hathaway, wrote in a New York Times op-ed piece that while he supports the government stimulus plan, the country must be on guard against "greenback emissions" – the residual effects of increasing debt that could plague the nation down the road.

Buffett writes that "enormous dosages of monetary medicine continue to be administered and, before long, we will need to deal with their side effects. For now, most of those effects are invisible and could indeed remain latent for a long time. Still, their threat may be as ominous as that posed by the financial crisis itself."

The ratio of deficit to gross domestic product will hit 13 percent this year, Buffett says – far eclipsing the non-wartime record of 6 percent over the past nine decades.

The country's net debt will hit 56 percent of GDP, he says.

The national debt is projected to reach $1.8 trillion by the end of the fiscal year (Sept. 30).The budget deficit broke a monthly record in July – swelling to an unprecedented $180 billion over the first 10 months of the year.

Congress will have to address the spiraling deficits before long, Buffett says.

"With government expenditures now running 185 percent of receipts, truly major changes in both taxes and outlays will be required. A revived economy can't come close to bridging that sort of gap."

And until the debt ratios are tackled, the U.S. dollar will remain at risk as the world's reserve currency.

The Dollar Index has fallen 12 percent from this year's earlier high, reports Bloomberg.

"Unchecked greenback emissions will certainly cause the purchasing power of currency to melt," Buffett writes. "The dollar's destiny lies with Congress."