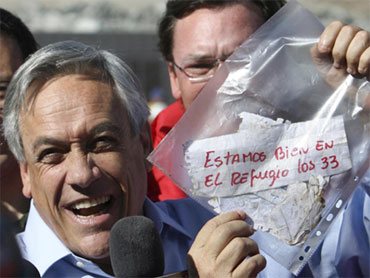 For 33 men found alive after 17 days trapped deep in a copper and gold mine, the toughest challenge now may be preserving their sanity during the months it may take to carve a tunnel big enough for them to get out.

For their families above ground on Monday, euphoria and more anxiety meant for a sleepless night at the realization that the miners may be stuck until Christmas.

The miners survived by using a backhole to dig a channel for drinking water, CBS News correspondent Seth Doane reported. It is believed they're trapped in a space the size of a small apartment.

"We didn't sleep. We stayed up all night long hoping for more news. They said that new images would appear, so we were up hoping to see them," said one, Carolina Godoy.

Dawn broke behind a cold fog on the surface of the gold and copper mine in Chile's Atacama desert, where an intense rescue effort finally reached the miners on Sunday after weeks of missteps, new cave-ins and other false starts.

Now the plan is to carve a wider tunnel, just big enough for the men to be pulled out one by one. That equipment works much more slowly than the bore that drilled the 15-centimeter-wide shaft used to make first contact.

That narrower drill broke through 2,257 feet of solid rock to reach the emergency refuge where the miners have gathered. The trapped men quickly tied two notes to the end of a probe that rescuers pulled to the surface, announcing in big red letters: "All 33 of us are fine in the shelter."

"Today all of Chile is crying with excitement and joy," President Sebastian Pinera said at the mine.

And where many were beginning to give up hope, the scene above ground became a celebration Sunday night, with a barbecue for the miners' families, roving musicians, lit candles and Chilean flags making the barren landscape seem festive.

The men already have been trapped underground longer than all but a few miners rescued in recent history. Last year, three miners survived 25 days trapped in a flooded mine in southern China, and two miners in northeastern China were rescued after 23 days in 1983. Few other rescues have taken more than two weeks.

The miners' survival after 17 days is very unusual, but since they've made it this far, they should emerge physically fine, said Davitt McAteer, who was assistant secretary for mine safety and health at the U.S. Labor Department under President Bill Clinton.

"The health risks in a copper and gold mine are pretty small if you have air, food and water," McAteer said.

Still, he said the stress of being trapped underground for a long period of time can be significant.

"There is a psychological pattern there that we've looked at," McAteer said. But "they've established communication with the guys; there are people who can talk them through that."

The hole already drilled will be used to send down small capsules containing food, water and oxygen if necessary, and sound and video equipment so the miners can better communicate with loved ones and rescuers. That two-way communication may be key to keeping them thinking positive.

A video camera lowered down the probe shaft Sunday showed some of the miners, stripped to the waist in the underground heat, waving happily. But they weren't able to establish audio contact, Pinera said.

"I saw eight or nine of them. They were waving their hands. They got close to the camera and we could see their eyes, their joy," the president said.

The miners seemed to be aware that their rescue may take a long time, according to one of them, Mario Gomez, perhaps the eldest of the trapped men at 63, who wrote a note to his wife.

"Even if we have to wait months to communicate. ... I want to tell everyone that I'm good and we'll surely come out OK," Gomez wrote, scrawling the words on a sheet of notebook paper the miners tied to the probe. "Patience and faith. God is great and the help of my God is going to make it possible to leave this mine alive."

Mine officials and relatives of the workers had hoped the men reached a shelter below where the tunnel collapsed Aug. 5 at the San Jose gold and copper mine about 530 miles (850 kilometers) north of the capital, Santiago. But they had said the shelter's emergency air and food supplies would last only 48 hours.

Gomez wrote that the miners used vehicles for light and a backhoe to dig a channel to retrieve underground water.

It was unclear whether their air supply was in danger of running out.

Rescuers had drilled repeatedly in an effort to reach the shelter, but failed seven times. They blamed the errors on the mining company's maps. According to Gomez's note, at least some of those earlier probes were close enough that the trapped miners heard them. The eighth attempt finally worked.

Gomez's note, which the president read aloud on live television, focused on expressions of faith and love for his family. But frustration also showed through in one line, where he declared that "this company has got to modernize."

Chile is the world's top copper producer and a leading gold producer, and has some of the world's most advanced mining operations. But both the company that owns the mine, San Esteban, and the National Mining and Geology Service have been criticized for allegedly failing to comply with regulations. In 2007, an explosion at the San Jose mine killed three workers.

Liliana Ramirez couldn't believe it when Chile's mining minister said her husband had sent a note to his "Dearest Lila."

"I know my husband is strong, and at 63, is the most experienced miner who could lead his co-workers," she said, but she vowed to keep him above ground once he's rescued.

Authorities and relatives of the miners hugged, climbed a nearby hill, planted 33 flags and sang Chile's national anthem after discovering the miners had survived.

Along the length of Chile, horns honked, flags waved and people watched the drama unfold live on television and computer screens. It was a rush of good news in a country still rebuilding from a magnitude-8.8 earthquake Feb. 27 and its resulting tsunami, which together killed at least 521 people and left 200,000 homeless.