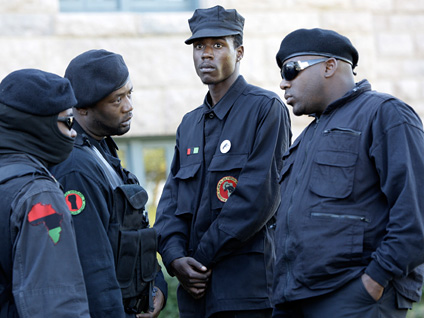 The brakes apparently failed on a 26-year-old bus Tuesday before it plowed through a highway toll booth and slammed into a concrete wall in western Mexico, killing 35 people - including ten children - who were on their way to an annual re-enactment of the Last Supper. About 20 people were injured.

The 1976-model bus had picked up passengers in the Pacific coast state of Guerrero and was headed to the city of Guadalajara when the accident occurred in Zinapecuaro, 110 miles west of Mexico City.

The bus had been traveling downhill for about three miles when it arrived at a toll plaza, where the driver was apparently unable to stop the vehicle. It careened through an empty toll lane - avoiding other vehicles waiting nearby - plowed through a toll booth and then rammed into a pillar supporting a bridge.

The bus was torn to bits by the force of the impact.

Passengers were thrown through the bus windows in the crash, which scattered wreckage and bodies along hundreds of feet of roadway. The most severely injured were taken 30 miles away to hospitals in Morelia, the Michoacan state capital, said local emergency services director Juan Alberto Valdez.

Felipe Avila, the Zinapecuaro director of civil defense, reported that ten children are among the dead.

"We got to the scene, there were a lot of bodies lying on the highway, and people were screaming in pain," Avila said. "The vehicle was just shredded."

Both Avila and Valdez put the death toll at 35.

The victims all were members of the Luz Del Mundo, or Light of the World, a conservative Christian church based in Guadalajara, and were planning to participate in the annual re-enactment of the Last Supper that draws up to 300,000 people.

"This is a very sad situation, we are all very upset," church spokesman Eliezer Gutierrez said. "In the 68 years the church has hosted this celebration, we have never had a tragedy of this magnitude."

"This year's celebration will go on as scheduled," Gutierrez said. "We feel that would have been their wish."

Federal highway police said they detected evidence of a failure in the bus' brake system, the government news agency Notimex reported. The bus was operated by the Costa Grande bus line, a local carrier.

The church is offering legal and medical aid to the victims, and "would support them, if they so decided" to take legal action against those responsible for the crash, Gutierrez said.

It was the latest in a string of fatal bus crashes in recent months in Mexico involving poorly maintained vehicles, poor road conditions, or speeding.

Authorities investigating the cause of the accident say they are probing the bus company for licensing and possibly other irregularities.

Michoacan Attorney General Lucila Artiaga adds that the bus was old, in "very, very bad condition," and packed beyond capacity with some 60 people.

Authorities also say that tests done on the body of the driver show no evidence of alcohol or drugs in his blood.