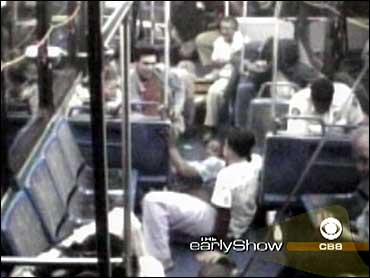 A head-on collision in south Florida between a municipal transit bus and a dump truck near Miami injured 22 people, though none seriously. The scene inside the bus was

One camera on the Miami-Dade Transit bus recorded the headlights of the dump truck as it approached and hit the bus.

Another camera showed the scene inside the bus, as passengers were thrown from their seats by the impact. The seats weren't equipped with seat belts.

One passenger is heard wailing, "Lord, help me. Help me, Jesus!"

Another is heard crying. Another, screaming over and over.

Seventeen others were taken to the hospital with injuries ranging from bruises to possible broken bones.

Police and county transit investigators are probing the cause of the crash.