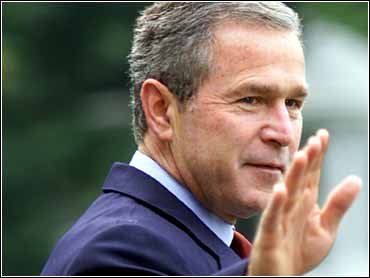 More than a dozen doctors gave George Bush his first physical examination since he became president and pronounced him in outstanding health on Saturday.

The president did have three sun-induced lesions removed from his face before being declared "fit for duty."

Bush endured a six-hour exam by 14 physicians before departing for his summer vacation in Texas.

The tests placed the 55-year-old Bush's cardiovascular fitness in the top 2 percent of men his age.

"The president is in outstanding health and is fit for duty," the doctors said in a written statement released aboard Air Force One on Bush's flight to his Texas ranch for a monthlong stay.

"All data suggest he will remain so for the duration of his presidency," the report said.

"I feel pretty good. I think you'll find I'm in pretty good shape," Bush told reporters as he emerged, waving and smiling, from Bethesda Naval Hospital. He boarded a helicopter for Andrews Air Force Base, where his airplane waited.

Bush had three small lesions removed from his face at the hospital. The potentially cancer-causing skin lesions, a common condition known as actinic keratoses, are caused by exposure to the sun.

Bush has lost weight since moving to the White House. He weighed 194.5 pounds last year when he was governor of Texas and had his last physical; his body fat then was 19.9 percent.

The president runs an average of 3 miles four times a week and cross-trains with swimming, free weights and an elliptical trainer.

Bush's battery of tests included an MRI on his left knee that came back normal. Bush had arthroscopic surgery on the knee in 1997.

The exam found some symptoms of seasonal allergies. Hearing tests found Bush continues to have a mild high-frequency hearing loss, but has excellent hearing for normal conversation.

Bush and first lady Laura Bush are vacationing at their remote ranch through the end of the month, with several outings planned - to Colorado, Wisconsin, New Mexico and Pennsylvania - to keep the president and his agenda in the public eye.

By the time he returns to the White House, Bush will have spent nearly two months of his presidency at his 1,600-acre spread in Crawford, Texas, plus 14 weekends at the Camp David presidential retreat in Maryland. As such, White House advisers are sensitive to suggestions that Bush might be loafing and have dubbed this his "Home to the Heartland Tour," emphasizing it is a working vacation.