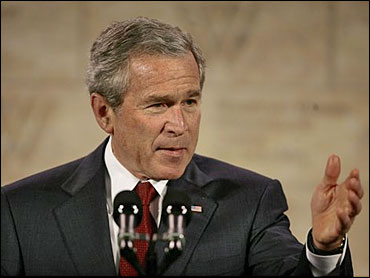 On the eve of landmark elections in Iraq, President Bush on Wednesday accepted responsibility for going to war despite intelligence that "turned out to be wrong."

But, he insisted, the decision to oust Saddam Hussein was still correct.

"It is true that much of the intelligence turned out to be wrong. As president I am responsible for the decision to go into Iraq," the president said in the fourth of a series of speeches defending his Iraq strategy. "And I'm also responsible for fixing what went wrong by reforming our intelligence capabilities. And we're doing just that."

The president called Thursday's parliamentary elections "a watershed moment in the story of freedom," reports CBS News White House correspondent Mark Knoller, though he conceded it won't stop the insurgents and terrorists.

"They know that as democracy takes root in Iraq their hateful ideology will suffer a devastating blow, so we can expect violence to continue," Mr. Bush told the Woodrow Wilson International Center for Scholars in Washington.

Click here to listen to the entire speech.
But with public opinion still running against his mission, Mr. Bush still was left defending his decision to go to war nearly three years ago.

"We are in Iraq today because our goal has always been more than the removal of brutal dictator," Mr. Bush said. "It is to leave a free and democratic Iraq in his place.

"My decision to remove Saddam Hussein was the right decision. Saddam was a threat and the American people and the world is better off because he is no longer in power," the president said.

As he usually does, Mr. Bush asserted that the Iraq of the future, with a functioning democracy and thriving economy, would be a model for other nations in the turbulent Middle East. But he added a specific reference to the inspiration that a free Iraq could provide to reformers in the region's two governments most hostile to the United States — Syria and Iran.

The president is banking on a successful election to signal that his war plan is working. If the voting establishes a successful government, it eventually could lead to the withdrawal of U.S. forces.

The president could use some more good news in Iraq. With the violence showing no sign of waning, most Americans are unhappy with his handling of the war and some lawmakers are questioning how long the troops should stay.

Rep. John Murtha, D-Pa., a vocal critic of the war, said it's time to put the Iraqis in charge.

"Our American troops have become the targets in Iraq and that's why I'm saying they're actually better off solving this themselves," Murtha said.

Mr. Bush has been pushing back aggressively against the negative image of his war mission with a series of four speeches in recent weeks. Thursday was the last in the series.

Answering critics who have said he had offered no clear definition of victory in Iraq, Mr. Bush offered a succinct summation.

"Victory will be achieved by meeting certain objectives: when the terrorists and Saddamists can no longer threaten Iraq's democracy, when the Iraqi security forces can protect their own people, and when Iraq is not a safe haven for terrorists to plot attacks against our country," he said. "These objectives, not timetables set by politicians in Washington, will drive our force levels in Iraq."

CBS News chief White House correspondent John Roberts (video)
says Republicans have been pressuring the president to be far more open about the situation on the ground in Iraq. They say the Democrats have been making a lot of headway in recent weeks with their attacks – attacks that have gone unanswered – and they say it's up to the president to be a little more forthcoming. That way he can win back some of the public trust, which polls show he has been losing substantially in the last few weeks.

In the Senate, 40 Democrats and one independent signed a letter to Mr. Bush on Wednesday in which they urged him to be more frank with Iraqis and the American public.

The administration, the letter said, should "tell the leaders of all groups and political parties in Iraq that they need to make the compromises necessary to achieve the broad-based and sustainable political settlement that is essential for defeating the insurgency in Iraq within the schedule they set for themselves."

Mr. Bush, the letter said, also must present "a plan that identifies the remaining political, economic, and military benchmarks that must be met and a reasonable schedule to achieve them."

Mr. Bush got a better reaction from a group of House Democrats he hosted for a briefing on Iraq before the speech. They were complimentary of the president's strategy and his recent doses of candor about the situation there. The briefing was given by military commanders via videoconference from the field and top administration officials at the White House.

"There was a dose of reality that I have not heard before," Rep. Steve Israel, D-N.Y., told reporters outside the White House afterward. "Frankly I found it refreshing."

"The soldier on the ground listens to the president any time he is going to speak like that, the Commander in Chief," he said. "I think that they look at it as the past and that's what it was.Right now they are very focused on the mission of both securing the Iraqi elections coming up and supporting the Iraqi defense forces as they do their mission of supporting the Iraqi people."