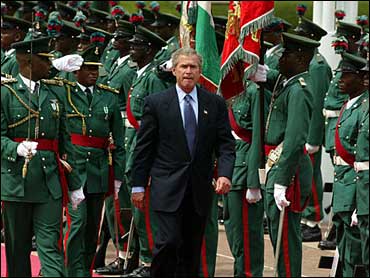 President Bush closed a five-nation tour of Africa on Saturday with words of hope and offers of help for Africa's battle against the deadly AIDS pandemic sweeping the continent.

"The progress we are already seeing in parts of Africa is proof that AIDS can be defeated in Africa," Mr. Bush told an annual summit that focuses on development in sub-Saharan Africa.

Earlier, during a meeting with Nigerian President Olusegun Obasanjo, Mr. Bush promised to "be active" in war-torn Liberia, but did not say what that might entail for any U.S. peacekeeping troops.

CBS News correspondent Mark Knoller reports that Mr. Bush may not make a decision next week, after all, on sending American soldiers to Liberia. Knoller notes that Secretary of State Colin Powell said Thursday that the president would be in a position to make a decision within a few days.

Knoller reports that, in the session with Obasanjo, Mr. Bush renewed his commitment to help enforce the ceasefire in Liberia and bring about a transfer of power there. But the exact role of the U.S. is yet to be determined.

In Liberia, the main rebel movement on Friday threatened a "firefight" with any peacekeepers deployed there before warlord-turned-President Charles Taylor steps down.

Taylor, who is wanted for war crimes in neighboring Sierra Leone, has promised to resign and accept asylum in Nigeria - but only after an international stabilization force arrives to ensure an orderly transition.

The rebels' strongly worded threat came amid mounting security fears in the capital, where hundreds of war veterans protested Friday outside the U.S. and European Union missions, complaining of attacks against Taylor's followers by opponents emboldened by his expected departure.

The rebel Liberians United for Reconciliation and Democracy has said it would welcome peacekeepers and wants U.S. troops to participate. But if the force comes with Taylor still in place, the rebels said it would only strengthen his ability to hang on to power.

"Any troop deployed before the departure of Taylor must be prepared for a firefight," the group said in a communique.

Thousands of people lined Mr. Bush's motorcade in route in Nigeria as he was driven to the airport for the trip home. The well-wishers included hundreds of children in school uniforms who waved American and Nigerian flags.

Mr. Bush and Obasanjo discussed the circumstances under which Taylor would live in exile in Nigeria, said a Bush administration official who briefed reporters.

Taylor still intends to make good on his promise to step down - as Mr. Bush has demanded - but wants certain assurances first, including the protection of his family, said the official, who spoke on the condition of anonymity.

Mr. Bush indicated some flexibility on the timing of Taylor's departure, telling Obasanjo it was important that Taylor's departure did not create a power vacuum that could plunge the country into chaos, the official said.

The president is awaiting reports from teams of military experts, who are surveying the situation in the West African nation and involved in talks with regional leaders, before deciding whether to deploy U.S. soldiers to help enforce a civil-war ending cease-fire in Liberia.

"Our assessment teams are still in place," Mr. Bush told reporters during the meeting with Obasanjo. "I told the president we would, you know, be active. The definition of that will be made known when we understand all the parameters."

Mr. Bush's African journey began Tuesday. It crammed meetings with a dozen heads of state and discussions about trade, terrorism and regional conflicts, tours of health centers and businesses - with only minimal sightseeing - into five days.

"Working together, we can help make this a decade of rising prosperity and expanding peace across Africa," Mr. Bush said in his farewell speech, before boarding Air Force One to return to Washington.

"We know that the people of Africa, when given their rights and given their chance will achieve great things on this continent of possibilities."

Mr. Bush's tour took him to corners of Africa most devastated by the HIV/AIDS pandemic that has killed thousands and has made orphans out of countless others. Nearly 30 million live with HIV/AIDS.

In private meetings with the leaders of Senegal, South Africa, Botswana and Uganda, Mr. Bush praised their AIDS awareness efforts but urged them to do more to help their countries and the continent overcome the often-fatal disease.

He took care to praise leaders who have spoken out openly to their people about the often-hidden topic of AIDS. On Friday in Uganda, Mr. Bush warned of the harm some African leaders do to their own, saying: "The AIDS virus does its worst harm in an atmosphere of secrecy."

To Obasanjo, Mr. Bush said Saturday: "I appreciate your honesty and openness and forthrightness when it comes to battling the pandemic of AIDS."

While in Nigeria, Africa's most populous country, Mr. Bush and first lady Laura Mr. Bush, who accompanied him on the trip, also toured Abuja National Hospital. The government facility has a successful U.S.-funded program to help prevent women from passing HIV to their children during childbirth.

Nigeria's HIV/AIDS infection rate is low, about 5 percent. But the White House says experts fear the rate could jump to about 25 percent by the end of the decade.

Obasanjo, saying Africans are often "the architects of our fortune or misfortune," acknowledged the responsibilities the continent's leaders have for their own people's advancement - against AIDS, poverty and other ills.

The president also promoted new legislation that would distribute up to $15 billion dollars over five years from the United States to the 14 hardest-hit African and Caribbean countries.

In his closing remarks, Mr. Bush called on Congress to move quickly to provide full funding for the proposal.

"The House of Representatives and the United States Senate must fully fund this initiative for the good of the people on this continent of Africa," he said.

A House committee voted last week to approve about $2 billion of Mr. Bush's program for the budget year that begins Oct. 1, a first installment on the $15 billion five-year pricetag.

Even though that was about $1 billion less than the president had originally sought, Mr. Bush called it "an important step."

Summing up the trip, Mr. Bush said America would seek to help Africa on a number of fronts in addition to the AIDS battle: expanding trade to create more jobs, preventing hunger, increasing capital investment, and rooting out corruption.

"The United States will help this vast continent of possibilities to reach its full potential," he said.

Throughout his trip, Mr. Bush also sought the cooperation of African leaders in the war on terrorism.

"We will not allow terrorists to threaten African peoples or to use Africa as a base to threaten the world," he said here.

Obasanjo, whose first election win in 1999 ended 15 years of brutal and corrupt military rule, has been hailed as the man who restored democracy to Nigeria. But the former military ruler's re-election in April was marred by fraud and scattered violence.