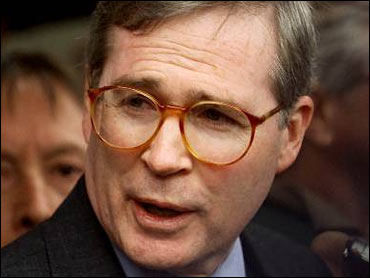 A top White House national security adviser is taking the blame for allowing a tainted intelligence report suggesting Iraq was trying to buy uranium in Africa to find its way into President Bush's State of the Union address.

Deputy national security adviser Stephen Hadley said two CIA memos and a call from CIA Director George Tenet had persuaded him to take a similar passage out of a presidential speech in October — and that he should have done likewise when it turned up again in State of the Union drafts.

"Had I done so, this would have avoided the whole current controversy," Hadley said on Tuesday. "It is now clear to me that I failed in that responsibility."

Bush aides said the president was upset by Hadley's failure to come forward with the CIA objections, but turned down what amounted to an offer by Hadley to resign. Mr. Bush "has full confidence" in his national security team, including Hadley and Tenet, White House communications director Dan Bartlett said.

It came as the White House pressed a full-scale damage control effort in an attempt to divert attention away from Mr. Bush's State of the Union comments on Iraq and Africa, which the White House withdrew earlier this month because evidence backing them was found to have been forged.

In his State of the Union address, Mr. Bush said: "The British government has learned that Saddam Hussein recently sought significant quantities of uranium from Africa."

The claim related to Iraq's alleged bid to Niger. In February, after the State of the Union, documents backing the allegation were found to be forgeries. A U.S. envoy had checked the claims in early 2002 and found them dubious.

The White House has offered a shifting defense against charges it misled the public.

National security adviser Condoleezza Rice, Hadley's immediate supervisor, told reporters on July 11 that there was discussion with CIA officials about their reservations to proposed language in the State of the Union Speech and that it was changed to meet the CIA objection. She has said repeatedly that the CIA did not object to the final wording used.

Tenet offered a public apology for not flagging the Iraq-Africa sentence when the CIA reviewed a draft of Mr. Bush's Jan. 28 State of the Union address.

It later emerged that Tenet had blocked the president from mentioning the charge, which related to Niger, in an October speech by Mr. Bush. The CIA had even tried to get Britain to omit the claim from a September report on weapons.

Then the White House said the statement was technically correct because it attributed the claim to the British. The administration subsequently tried to downplay the importance of the claim.

Last week, a CIA analyst said he had warned a National Security Council official about CIA doubts on the speech. A senior administration official said there had been internal deliberations at the White House over the wording of the speech, not with the CIA.

Also last week, the White House released a once-classified National Intelligence Estimate that laid out the case that Iraq was seeking nuclear weapons, but it contained doubts expressed by the departments of State and Energy about specific claims made by the administration.

Hadley, in a rare hour-long, on-the-record session with reporters, said he had received two memos from the CIA and a phone call from Tenet raising objections to a section in a speech Bush was to give in Cincinnati on Oct. 7.

But he suggested the entire episode slipped his mind when Mr. Bush's State of the Union speech was being vetted.

The memos, dated Oct. 5 and Oct. 7, were discovered over the weekend. Both were addressed to Hadley and to presidential speechwriter Michael Gerson.

Those memos came only days after National Intelligence Estimate, which contained the Africa claims. It was unclear why the CIA's opinion shifted so sharply so soon.

Another CIA official, Robert Walpole, sent Hadley a separate memo in January as the State of the Union was being finalized. That memo repeated the uranium claim, reports The New York Times. It may have confused matters at the White House.

Some Democrats were quick to criticize Mr. Bush over the latest twist in the saga.

But former President Clinton said Mr. Bush's erroneous reference is understandable, partly because Saddam's regime had not accounted for some weapons by the time Mr. Clinton ended his term in 2001.

Meanwhile, the U.S. envoy who checked out the Niger story in early 2002 is complaining that he's been targeted by the White House for revealing his investigation publicly two weeks ago. The columnist Robert Novak last week quoted senior administration officials saying Joseph Wilson's wife is a CIA agent — effectively naming a clandestine intelligence officer.