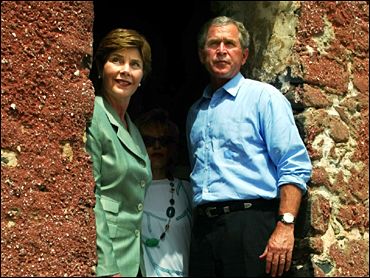 President Bush is now on the ground in South Africa, the second stop of his five-country tour of Africa. — He landed at Waterkloof Air Base outside of Pretoria, South Africa, Tuesday night.

Mr. Bush will be meeting on Wednesday with South African President Thabo Mbeki to discuss AIDS, trade, and the Zimbabwe political situation.

Earlier Tuesday the President met with leaders in Senegal and took a tour of an old slave island where Africans were held before they were shipped to America.

Visiting a site where slaves were processed before their forced trip to American homes and fields, Mr. Bush called slavery "one of the greatest crimes of history."

The journey to Goree Island was the emotional highlight of Mr. Bush's daylong visit to Senegal, the first leg of his five-nation Africa tour.

Mr. Bush toured a slave house, built by the Dutch in 1776, where Africans were held, weighed, fed and often punished before making the long trans-Atlantic journey to America's colonies. They left through what is known as "The Door of No Return."

"Liberty and life were stolen and sold," Mr. Bush said after touring the house.

"Human beings delivered, sorted, weighed, branded with marks of commercial enterprises and loaded as cargo on a voyage without return," Mr. Bush said. "One of the largest migrations in history was also one of the greatest crimes of history."

The president recited a litany of Africans and African Americans who made contributions to American society, from the arts to politics: abolitionist Frederick Douglass, slave-poet Phillis Wheatley and Martin Luther King Jr.

"The stolen sons and daughters of Africa helped to awaken the conscience of America," he said.

Mr. Bush did not apologize for slavery but noted Americans throughout history "clearly saw this sin and called it by name."

Before the trip, Condoleezza Rice, Mr. Bush's national security adviser, gave no indication that the president would apologize for slavery. She told a pre-trip briefing last week that, "there is plenty of blame to go around about slavery."

The legacy of slavery is one reason why the president in under pressure to send U.S. troops to bring peace to Liberia. The nation was founded in 1821 by freed slaves and has traditionally had close ties to the United States.

The president's dilemma on whether to send troops loomed over his African tour.

Speaking to reporters during a meeting with Senegalese President Abdoulaye Wade and the heads of seven other West African democracies, Mr. Bush said he had not yet decided on the United States' involvement in Liberia. He also repeated his demand that Liberia's president, Charles Taylor, relinquish power.

Mr. Bush said the group had "a good discussion" on Liberia. Among the leaders was President John Kufuor of Ghana, the head of the 15-country Economic Community of West African States, which has been deeply involved in talks over how to stabilize Liberia.

"We're now in the process of determining the extent of our participation," Mr. Bush said. "The U.N. is going to be involved but the U.S. will work with ECOWAS."

Upon arrival in Senegal Tuesday morning, Mr. Bush headed straight into a Presidential Palace meeting with Wade, an ally in his anti-terror campaign.

Clusters of curious onlookers gathered on dirt roads to watch Mr. Bush's motorcade pass by, many standing with their arms folded across their chests, some clapping and waving.

Few people ventured out and shops and homes were shuttered downtown Dakar as security was tightened during Mr. Bush's visit. Dakar's main highway was closed off, and people living along the route Mr. Bush was taking were told to keep their windows closed.

"It's the first time I've ever seen the city like this," said Yaya Badji, 28, a guard. "All economic activity has stopped."

The scene was in stark contrast to the reception given Mr. Bush's predecessor, President Clinton, on his first Africa trip, in March 1998. Thousands of people lined Senegal's streets to cheer, jump, clap, wave, sing and play drums for Mr. Clinton. His visit to Ghana drew the largest crowds of his presidency, estimated at 500,000 people.

Mr. Bush's five-day trip to Africa, his first to the continent as president, also takes him to Botswana, Uganda and Nigeria.

The president wants Liberia's Taylor to step down to pave the way for peace in his war-torn country. Taylor says he is considering asylum in Nigeria, but apparently wants to see U.S. peacekeepers arrive before he leaves.

Mr. Bush has sent a U.S. military team to the capital city of Monrovia to assess the humanitarian situation before making a decision.

Nearly one-third of Liberia's 3 million people have been forced from their homes by fighting since rebels took up arms against Taylor in 1999. The three years of fighting are the latest round in an on-and-off insurrection that Taylor, then a warlord, started in 1989. Taylor is also wanted in neighboring Sierra Leone for backing rebels there who committed atrocities against civilians.

In another example of the bloodshed that forms a dismal backdrop to the African success stories the president is touring, a human rights groups said righting between rival tribal and rebel factions in a volatile northeastern Congolese province killed an estimated 5,000 civilians in the nine months to March.

Mr. Bush chose his itinerary to represent the new Africa he hopes will emerge from such carnage.

The leaders of South Africa, Nigeria and Senegal want Western assistance for a plan they have formulated to rescue Africa; Botswana, a prosperous southern African nation, is actively confronting the AIDS scourge. Uganda, a thriving east African power, is seen as an important ally in confronting potential terror networks in the region.

Many African leaders see Mr. Bush's visit as a key part of a strategy to combat rising anti-American sentiment and the image of Washington as an international bully.

Mr. Bush is expected to discuss Africa's importance to his administration and to promote programs to boost U.S.-Africa trade, foster democracy in African nations, and tackle the HIV/AIDS pandemic that is devastating in sub-Saharan Africa.