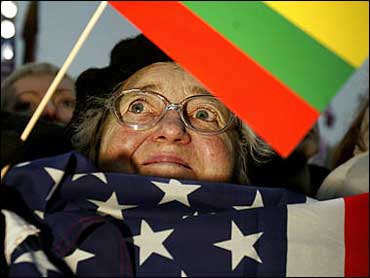 President Bush on Saturday embraced nations newly invited to join NATO and said the alliance must defeat terrorism's "face of evil," just as the West confronted the Nazis and communists who oppressed this region for decades.

"In the face of aggression, the brave people of Lithuania, Latvia, and Estonia will never again stand alone," he said. The three countries were among seven invited to join NATO this week, along with other former Eastern Bloc nations Bulgaria, Romania, Slovakia and Slovenia.

Mr. Bush had the same message for tens of thousands of Romanians he addressed later Saturday in Revolution Square, site of the 1989 revolt that toppled communist rule and the place where late dictator Nicolae Ceausescu fled by helicopter from an angry mob.

"The world has suffered enough from fanatics who seek to impose their will through fear and murder," Mr. Bush said. "The NATO alliance and the civilized world are confronting the new enemies of freedom and we will prevail."

"By his search for terrible weapons, by his ties to terror groups, by his development of prohibited ballistic missiles, the dictator of Iraq threatens the security of every free nation, including the free nations of Europe," Mr. Bush said.

"NATO membership will make Romania more secure and Romania will add to the strength of the NATO alliance as we face unprecedented dangers," he said.

Mr. Bush, speaking behind three walls of rain-smeared bulletproof glass, said he observed a rainbow emerging from cloudy skies just before he began speaking. "God is smiling on us today," he said.

Romania, he said, "brings moral clarity to our NATO alliance. ... You know the difference between good and evil because you have seen evil's face."

Mr. Bush flashed a thumbs-up as Romanian President Ion Iliescu called the NATO invitation "a historic moment that marks the definitive break from its past and at the same time a new beginning."

"International terrorism requires common action, solidarity between all states and the entire democratic world," he said.

Iliescu, responding to criticism of graft in his government, earlier told Mr. Bush he would make a "frontal attack" on corruption.

More than an hour before the address, some 50,000 people had already gathered in the square, masses of humanity that wound through a half dozen city streets. Countless thousands more were lined up to walk through metal detectors to get into the highly secured viewing area.

At least three jumbo screens were set up in the square so Mr. Bush could be seen by people who had buildings standing between them and the stage.

At one point, the American national anthem blared out of loud speakers.

Mr. Bush, who declared a war against terrorism after the Sept. 11 attacks on America, warned that "our alliance of freedom is being tested again by new and terrible dangers."

Mr. Bush suggested this week at a NATO summit that some old-line NATO allies have a stale view of the world. New NATO countries, eager to protect liberty, will refresh the alliance, he said.

"NATO does not only depend on the might of armies but on the character of men and women," he said. "We must be willing to stand in the face of evil, to have the courage to always face danger. The people of the Baltic states have shown these qualities to the world."

In Vilnius, Mr. Bush laced his speech with references to the Soviets and Germans who alternately ruled the Baltics for decades, and he drew a strong cheer when he promised that the Baltic nations will never stand alone again.

"Aciu" the citizens chanted, or "thank you" in Lithuanian.

"Many doubted freedom would come to this country, but the United States always recognized an independent Lithuania," Mr. Bush said. "We knew that this continent would not remain divided."

Some 5,000 people attended - one of Mr. Bush's largest overseas audiences, but well short of the 25,000-50,000 the White House had predicted. White House officials were surprised by the lack of noise from the crowd.

Former President Clinton regularly drew tens or hundreds of thousands to his speeches abroad; Saturday was the first time that Mr. Bush tested his own overseas appeal in such an open, town-square venue.

Widely faulted by Europeans for an arrogant and U.S.-first foreign policy, Mr. Bush's previous appearances overseas have drawn tens of thousands of protesters, and his speeches were contained to invited, indoor audiences.

But the thousands who thronged Rotuse Square were eager to hear Mr. Bush.

"We've been waiting for this for 300 years," said Vladas Ludkevicius, 73, walking to Town Hall Square carrying a yellow, green and red Lithuanian flag. Referring to when Lithuania first came under Russian domination in 1795, he said, "we've always been occupied, mostly by Russia, but also Germany and Poland. Now we are where we want to be."

Earlier, in a high-ceilinged hall at the presidential palace, Mr. Bush received a large silver star medal and sash as thanks for his support for Lithuania's invitation to NATO, which was extended by Mr. Bush and 18 other western leaders Thursday.

"It is a great moment for us," said Lithuanian President Valdas Adamkus.

Adamkus settled in Chicago, where he worked on an auto plant assembly line. He later rose to the top ranks of the U.S. Environmental Protection Agency.

Mr. Bush left Romania for home and was scheduled to arrive in Washington late Saturday.