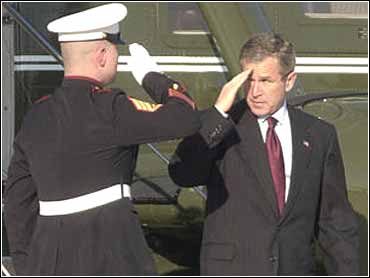 
The Bush administration could have saved itself one giant headache had it sought congressional approval for its plan to use military tribunals as an option in prosecuting suspected terrorists.

Actually, the Justice Department could have saved itself two headaches: one that's occurring now on Capitol Hill and one which may occur months or years from now at the United States Supreme Court.

A fairly broad coalition in Congress is steamed at Attorney General John Ashcroft and his boss, President Bush, for unilaterally announcing that the executive branch would consider the use of military tribunals.

Congress feels left out, and rightly so. But the anger and suspicion made public during a Senate hearing on the topic may be nothing compared to the reception the tribunals may receive if the issue ever comes before the justices of the High Court.

If military tribunals are to be used, it will be up to the executive branch, via the Department of Defense, to implement their use. And clearly there is strong legal precedent for some types of tribunals in some kinds of circumstances.

But as noted in this space several times over the past few weeks, the legal issues surrounding military tribunals in the current context are not so clear that the administration should have risked going it alone.

Instead, the White House and the Justice Department should have initially gone to Congress with the military tribunal idea and asked for two very specific things. First, the president should have asked Congress for a formal declaration of war.

Either we are at war or we are not at war. If we are at war, and public officials seem to be telling us that we are, we should say so. And if we are not, we should say so, too. A congressional declaration of war would put the administration's plans to use military tribunals on much sounder footing by making our current circumstances much more analogous to the one which the Supreme Court was presented with in 1942, when it approved the use of military tribunals.

As things stand now, the lack of such a declaration will allow opponents of the use of tribunals to make an effective argument that the Supreme Court precedent doesn't apply, factually, to the current situation.

The second thing the administration should have asked for was an amendment to a federal law, 10 USC 836, which allows the president to declare that "it is not practicable to apply in military commissions under this order the principles of law and the rules of evidence generally recognized in the trial of criminal cases in the United States district courts."

This language is ambiguous and likely to cause trouble for the administration should the case go to the Supreme Court. But if Congress were to broaden the president's powers under this statute, if Congress wee to change this statute to affirmatively offer its seal of approval to military tribunals which do not apply recognized rules of evidence, the administration would be in much better shape under the law.

A broadened Section 836 would allow the Administration to stand up before the Justices and argue that Congress is fully behind the way the tribunals are intended to be used and congressional assent is no small thing to the Supreme Court.

There is no guarantee, of course, that Congress would have granted these two administration requests. But you never know unless you ask. And now that the administration has not asked for those things, now that it has bulldozed its way through this tribunal issue, it faces a Congress which actually could flip the other way.

Indeed, Congress could significantly jeopardize the legitimacy, even the constitutionality of the military tribunals by passing an amendment to Section 836 which greatly reduces the president's ability to guide the rules of military tribunals.

For example, if Congress were to alter Section 836 to read that the president must apply the federal rules of evidence to military tribunals, it would put the Administration in a very tough spot before the courts.

Remember, Congress gets to make the laws that the administration gets to enforce. Would such a change to Section 836 garner enough votes in both houses of Congress to pass? I don't know. Would President Bush veto such an attempt? I don't know. And I certainly don't know whether there would be enough support in Congress to override such a veto.

But it is clear that Congress could make things much more difficult for the administration when it comes to these military tribunals than it already has. And it also is clear that the conservative Supreme Court – ever mindful of congressional intent - would take very seriously an expression of congressional intent so specific as the one presented in this hypothetical example.

Whether you agree or not with the use of military tribunals, whether you believe that they will be beneficial to the national interest or will harm it by, say, scaring other countries from extraditing suspects here, it seems pretty evident that the administration misplayed its political hand even as it put its legal cards on the table. And by doing so, in some ways the administration has lost a measure of control over how the rest of this particular game will play itself out.