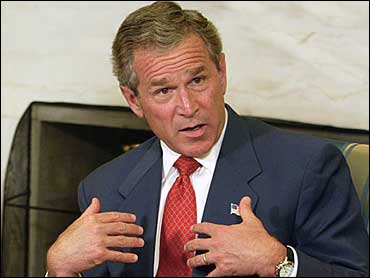 But remarkably, reports CBS News Chief White House Correspondent John Roberts, officials still refused to say the uranium report was flat out wrong, just not solid enough to include in the State of the Union.

"We don't know if it's true but nobody — but nobody — can say it was wrong," Fleischer said. "That is not known." Administration officials said Mr. Bush's statement was technically correct since he was simply saying that British intelligence said something was true.

CIA Director George Tenet said last week his agency was responsible for allowing the claim into Mr. Bush's Jan. 28 State of the Union address, and Fleischer indicated the White House had no interest in digging deeper into an incident that has embarrassed the administration.

"I think the bottom has been gotten to," he said. At the same time, Fleischer said, "No one can accurately tell you it was wrong. That is not known."

It was another attempt to move past what has become a tremendous embarrassment for the president, one that hung heavily over Mr. Bush's meeting Monday with U.N. Secretary-General chief Kofi Annan, his first since the war.

Defending his credibility, Mr. Bush said he made the right decision to invade Iraq and the intelligence on which he relied was "darn good" – even though some of it now is in question.

Mr. Bush said the United States was reviewing documents and interviewing Iraqis in an intensive effort to support the administration's still unproven claim that Saddam Hussein had weapons of mass destruction.

"When it's all said and done," he insisted, "the people of the United States and the world will realize that Saddam Hussein had a weapons program."

At the same time, both also said the intelligence falls short of the elevated standards necessary for a presidential address. They said Tenet had deleted a similar but more narrowly focused assertion from a Mr. Bush speech in Cincinnati three months earlier.

According to Fleischer, the reference to uranium in the Cincinnati speech was "very specific to Niger, (while) the language in the State of the Union was very different…there was other reporting about other countries beyond Niger."

White House officials also denied the uranium issue was a central reason to go to war with Iraq. But reviewing the president's speeches, it was clearly used to build a sense of urgency about the threat from Saddam.

"Should Iraq acquire fissile material, it would be able to build a nuclear weapon within a year," Mr. Bush said at his Sept. 12 speech to the United Nations.

And in his Jan. 28 State of the Union speech, he said, "The British government has learned Saddam Hussein recently sought significant quantities of uranium from Africa."

British Prime Minister Tony Blair, who travels to the White House later this week, has defended his intelligence services. But new polls show two-thirds of Brits think he misled them, either knowingly or unknowingly. And a new CBS News poll found a growing number, 56 percent, of Americans now believe the White House overstated the threat from Saddam's weapons.

Democrats, anxious for any opening to challenge the president's popularity, have leapt on the issue.

"Why isn't he leading to determine who should be held accountable for this?" asked Sen. Bob Graham, D-Fla., a candidate for the Democratic presidential nomination. "And why isn't he advocating reforms within the intelligence community to avoid a repetition?"

And Republicans are now worried that the bickering between the White House and CIA over who is to blame for the mistake is turning this into a real problem; one that threatens to erode public confidence in the president as a no-nonsense chief executive.

Republican sources say it's "amazing" that no one has been fired over this. And, they add, the longer it goes on the more it appears the president is "letting mediocrity reign."